You are currently browsing the monthly archive for May 2006.

Well I was just about to post a glorious fishing story, full of wit, humour and wonderful insight. And then it happend. Windows. Absolute pile of flipping………”(Â£*^”Â£)(!
Crashed and I lost it all. That will teach me.. going to buy a Mac I think.. I’ll try and get the courage to have another go tomorrow..
Buggrit.

Another weekend, another fishing trip or two.
Saturday I was on some nice water, not far from where I caught a couple of rather special fish last season. This river, well particularly where I fish it, doesn’t give up its secrets very easily. In fact at times it can be incredibly dour, even with fly on the water. Your only company can seem to be the billions of wee parr that attatck anything that goes near them. I watched one little specimin have 3 attempts at eating the same dun. I think he probably achieved in drowning it in the end. Due to the generally poor showing of fish I was back to my usual river investigations. I saw a few really big duns about, and eventually was savaged on the back of the head by one of them. First thought was an early mayfly, but it turns out they were large brook duns. I reckon probably a size 10/12 easily. 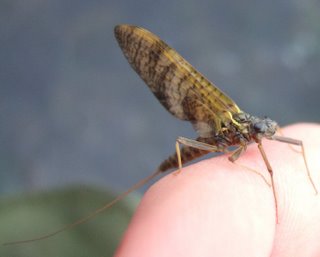 I fished up the stretch a few hundred yards, and eventually found a couple of better fish moving. I crept up along the high bank to within a few yards and managed a half decent cast that brought a nice rise. Definitely a better fish it seemed, until he rolled off..
Not much else doing.. weather was variable, but never cold. Spring definitely here in some capacity. A few rainy showers with some sunshine provided the climatic interest.
Sunday and I was a bit closer to home. One of my good pals over in Glasgow is a well known (!) fisher of the Kelvin. He’s a minor celebrity really.. So for my part I have been fishing on a wee urban river in my part of the world. It’s can actually be quite a tricky little stream.. Quite panicky wee fish, no surprise really living in town. I was on the river around lunch to find quite coloured water, with nothing rising. Actually I almost convinced myself there were a few rising fish in one of the pools, but was dissapointed to find the rings were from water drops off the trees.. 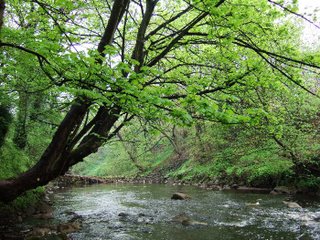 So I started with my usual (dry) flies, searching the likely water and getting badly tangled in the trees incredibly often. This seemed a little hopeful even for me, so I switched to upstream nymphing, and have to say I had a great time of it. One of my other pals is a dedicated and well known (some may even say famous) upstream nympher, who frequently tells me “it’s really not that difficult” or something to that effect. What I actually think is that he’s better than me, but I shall endevour to practice. Anyway, I began fishing the same water as with the dries, and it wasn’t long until I spotted a take and hooked a fish! Have to say, I was really quite surprised, and even a bit chuffed. Wasn’t long before I manged to land a couple as well, which was a bit of a result.. I’m sure you’ll agree, it was a bonny wee fish, and may one day grow to be a monster. 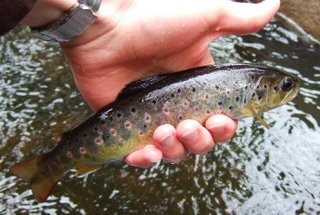 I’d say he was about average for this stream. I guess most people would say “strewth that’s a small fish” but I tell you, such fish are just great fun to catch on really light tackle in a tangly little burn, especially when trying out a few new tactics.
The best moment of the weekend was yet to come.. I was fishing a nice run further upstream when 3 lads shouted down to me from up the bank, wanting to know if I’d caught, and what I was fishing on. As usual my response was ‘a few wee ones’. They were very keen to see what fly I was on (which is actually great in itself – to see young lads taking up the fly, and not static bait fishing). So I offered them a couple flies, which they seemed quite glad about. They then came down and had a wee natter, which was just fine. I’m sure many people would look at such lads and presume they were out for trouble or to set fire to your car or something, but actually just talking to them a bit it was great to see their obvious enthusiasm for fishing. One of them had apparently “had 12 the day before, including rainbows” (of which there are none in the river), and sometimes fished with gold bead headed flies which “you don’t have to strike with”, which was a new one on me.. Now if I ever had 12 fish in one day on this river…..well let’s say I’d be a happy fellow.
So I talked to them a bit about how I was fishing (they seemed almost desperate to know – I reckon it was all in my fishing hat if anything) and explained the virtues of upstream nymphing, together with how it was quite tricky to get the hold of.. So I demonstrated on the run I was on, and hooked a really nice wee fish of half a pound or so. You couldn’t have written the script really.. a grand moment it has to be said 🙂 I tried to instill a little hint about how to respect the fish etc etc and how to properly release a trout, but not sure if they were listening by this point.. ach well it was a good laugh.

A Nod to a Beautiful Fish

Well it’s a couple of days since my last trip out. I was fishing another Scottish river I’ve not been on before. Things looked promising with last weeks good weather building up to a glorious spring day on Saturday. I had my permit by 8 o’clock and was riverside before half past. At this time of year it’s actually not really worth fishing until nearer lunchtime, but I love being on a river almost anytime, especially on such a bright sunny day. I opted to start fising some upstream spiders through a couple of nice riffles, and noticed a little stab on the leader after about two casts. Turned out to be one of the smallest parr I’ve ever caught at about 3-4 inches. It’s always good to see a river with plenty of small fish like this as it bodes well for the future. I fished on for a while, before eventually moving to another run. Here I turned around and fished the spiders across and down just slightly slower than dead drift, and it wasn’t long before a pretty little half pounder came to hand.
It was soon midday, and at last some flies began to hatch. Great big march browns they were too, always a good bet to bring the better fish to the surface at this time of year. It wasn’t long before fish started moving to the hatching flies and I could fish a dry fly with confidence. On the leader was the deer hair emerger I mentioned before. It’s really a cracking fly, well worth trying. 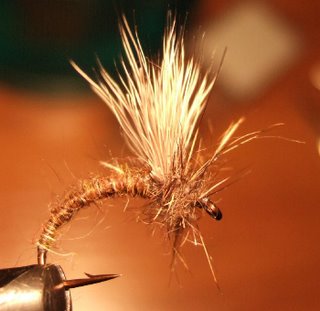 Of course when actually fishing the barb will be crushed as I fish catch and release on the rivers around here. Here’s one of the pretty wee trout that were avidly munching on the marchs’. 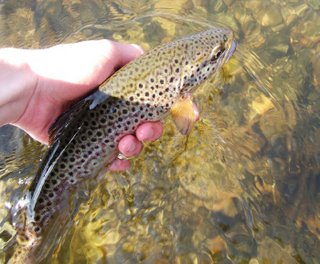 Things were pretty sporadic after that as a few more waves of duns came off, occasionally sparking a little frenzy.
Later on I was back fishing spiders down through riffles and pools. In one particularly good looking pool I felt a slight ‘draw’ in the line as a fish turned on the point fly, and I was immediatley fighting a much better fish. He went absolutely crackers and lept about 2 feet out the water before heading for the sea. I followed him downstream and after a (too long a) while brought him to the net. A beautiful fish of 1 3/4 lb, and a lovely way to finish things up. 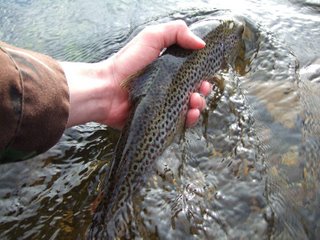 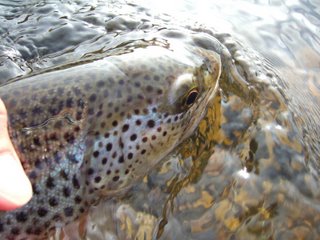 Fishing spiders has a long history, perhaps as old as fly fishing in this country. I find it is still a really good technique, although it can be very frustrating if not done correctly. I am by no means an expert, but I have just about got hold of the idea, and it’s starting to be pretty useful. I fish the spiders upstream dead drift, across and down and just about any way I think will be useful. The most important thing is to lead the flies through the current in a controlled manner, either dead drifting them, or letting them drop downstream just slightly slower than the current. I have a feeling this last point is particularly useful, because the water speed under the surface is generally progressively slower with increasing depth. So what looks like dead drift on the surface is perhaps not so 6 or 10 inches down. Thus by controlling the drift of the flies just a tiny bit slower than the current, I think you might get both a really good presentation, and immediate contact with any taking fish. Certainly worth a bit of perseverence.
Finally, here’s a shot I took after the last fish was released. Spot the trutta! 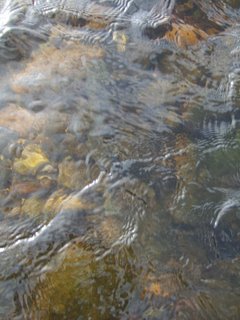