You are currently browsing the monthly archive for June 2006.

Foreigners catching all our fish… ;)

Been away for a few days on something of a break. Not much fishing, but plenty of other great stuff like hillwalking and windsurfing. Made this wee panorama of a nice remote hill loch.

Last weekend I met up with my pal Alistair, a pal of his and my wee broth, and we went fishing. Got to the river around 6 or 7, and noticed a good few blue winged olives (BWO) milling about. 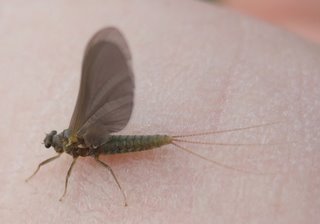 Always a welcome sign are they. No sign a couple weeks ago but after a bit of prolonged warmth they’re now about. Some sedges flitting around as well; all in all a promising scene.

Again things were a wee bit tricky for a while there. Dropped off a fish in the first pool on an F-fly, then didn’t do much until later on. The blood (brother) was doing pretty damn well all night taking loads of fish on one of (my tied) deer hair sedges. Seriously, this is such a good fly. Piss easy to tie and so often very very effective on loch or burn.

Highlight of the night was Al’s pal who took this undersized fish from a cracking little pool on the far side of the river. I don’t know why the guy bothers such small fish. Really should leave them alone to grow on a bit.

Later on and the sedges were making an appearance on the water, signified by more splashy rises. Plenty wee fish on the sedge, though lost my only good fish who would have gone a pound or so. 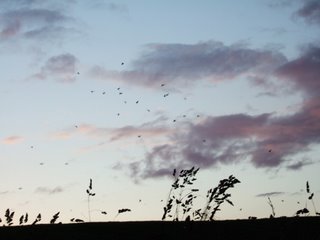 Yes those are big bad sedge flies in that photo above!

Blood had this nice fish near the end, all in all a great night for the twerp. 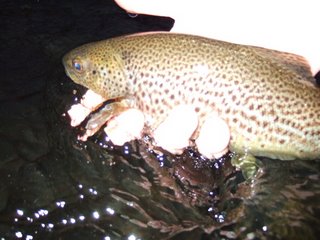 Dunno why but the last few trips haven’t been as great for me as usual.. I don’t feel like I’m fishing as well as I should be and I seem to have too much other stuff on my mind (especially this trip…) Need to sort that out.

Yesterday was the longest day of the year here in the northern hemisphere. Tonight I was out and about and at midnight there is still plenty light in the northern sky. One of my favourite times of the year. I really like watching the twilight. One of these years I will go to the very north of Scotland and fish all night. I’ve heard the sport can be amazing. 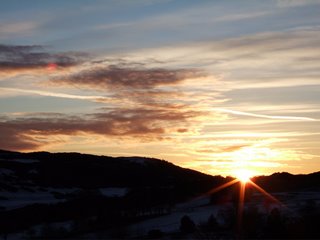 So I’ve now got a functioning computer again. I’ve got a few fishing trips to write about which I’ll hopefully do in the next wee while. This post is about an interesting trip I had down the same stretch of river as the last post, maybe 6 weeks ago now. I lost the original post in a computer crash which wounded me deep..

Anyway I headed down to the river mid-morning to find some flies actually hatching. Olive uprights if I remember, with a few grannom sedges around as well. Weather was overcast and reasonably warm for the time of year. Bit of a swirling breeze which was to make casting interesting. I took my usual walk down the river from the car, quietly checking out the various pools. I came to a pool I’ve looked at many times before, usually wondering if there were any lunkers. Did the same this time. Only difference was that there were… and at least two of them! 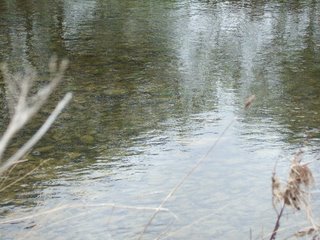 This was actually a really exciting event. You just don’t see big fish very often up where I was. I first guessed they were biggies by the rise forms: confident breaks on the surface, probably taking emerging nymphs. I then performed my best stealth-meister approach through the undergrowth until I was opposite where I thought one of the fish was lying. Peering through the water I got a shock when I saw an absolute cracker slowly patrolling near the opposite bank. Realistic guess is 3 or 4 lb. A couple minutes later a fish broke the surface just a few yards out from me, and I managed to spot him: he was probably 2lb anyway. Not just one, but two really good fish in the same pool, both rising, on the same day. I didn’t see any leprechauns but it wouldn’t have surprised me.

One the far side of the pool a couple of old trees dip into the water. I reckon the fish I saw live under there much of the time, and cannae be bothered to come out unless there’s a real hatch going down.

Did I catch them? Did I bugger. Why not? I’m crap.

To be fair, their rise patterns were damn confusing, so much so that I’m sure they were taking the piss out of me. Very erratic, same as the hatch really. One thing I did notice was they moved a hell of a lot, especially the fish nearest me. Don’t know what he was doing, but he just wouldn’t stay still. He didn’t look spooked, but he just kept shifting positions every few seconds, over quite a bit of water. I simply couldn’t time the right cast with the right wind etc etc as often seems to happen, and I royally ballsed it.

Still I know where they live, and will be back..

I did see some nice trees. 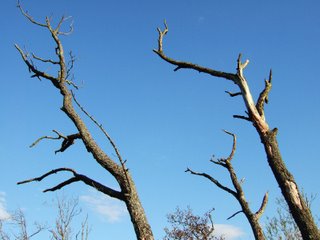 The leaves were not long out then either, and looked pretty interesting in the late afternoon sun. 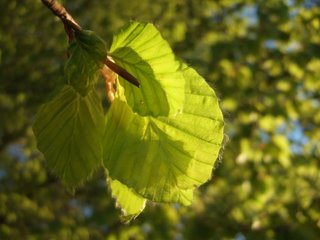 There be lunkers in there

Headed down to one of my regular stretches of river last night. The weather looked ok: overcast, warmish. Found the river looking very low. Like high summer actually. Spent quite a while watching a couple of moody looking pools. I managed only one good fish out of this whole stretch of river (several miles) last year. Very low (good sized) fish density, but millions of parr.. Still, it’s a nice area and one day I’ll hopefully catch another big fish.

This pool looked particularly good… there be lunkers in there.. 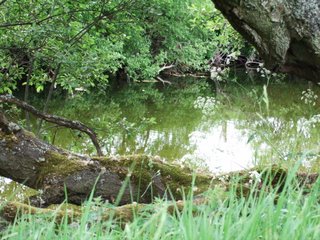 I came across a local farmer (rather he came across me) whilst I was performing some extreme stealth-camo stalking of the pool, who probably thought I had problems (fair enough). Had a nice chat with him, after he asked me if I’d “found him” yet. Apparently my extreme river-craft skills had told me right..

No fly life really, so I headed down to find some riffles to have some upstream nymphing practice. 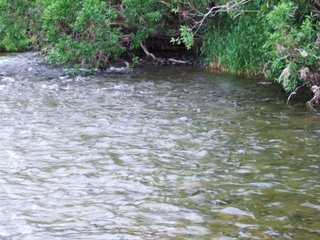 Amazingly I hooked a few fish within a pretty short time. I’m really beginning to get obsessed with this way of fishing..

There was plenty of other stuff to see this evening. These nice flowers really stood out. 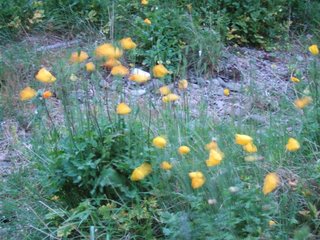 Had a nice evening last night down on a local Loch. Actually it’s a resevoir I think, but it looks quite a lot like it could be a wild loch in the far north. I’ve never fished any of the lochs near Edinburgh before, but I was meeting up with a pal for a reunion fish and I decided to give it a try.
It was hot hot yesterday and a bit later on it turned into a lovely evening. I had a couple of takes soon after starting to the usual DHS’s fished near static in the film, but missed them due to incompetence (and looking at the hills). Around half eight the fish started to show themselves a bit at the surface, and it didn’t take long to find a few pretty wee fish.

One thing I’ve noticed with these flies is that the fish really do take them with a lot of confidence, meaning it’s often out with the old foreceps to retrieve the fly (greatly helped by barbless…) A good sign of a good fly I’d say.

There was a pretty nice sunset to end the evening. 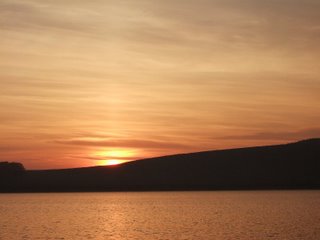 At least I thought it was the end.. not so as the hoar came rolling through Lothian from off the North Sea. This is a really strange weather phenomenon that anyone living on the east coast of Scotland may be familiar with. A few times a year a particularly warm spell of weather causes cold air sitting over the sea to be drawn over the land (for some reason). Where the two blocks of air mix any moisture vapour condenses out to form a dense fog. It goes from a balmy summer evening to freezing cold in a moment! Here’s a picture looking in almost the same direction as the first. Yes that’s a rise there..! 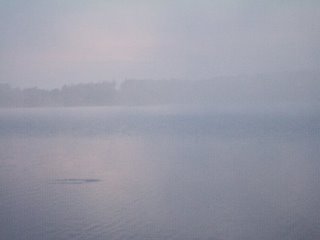 The fish didn’t seem to mind that much, as I caught a couple more wee ‘uns. Whilst walking out I found a nice scene where an old bit of fencing was sticking out the calm water. Twas a lovely way to pass an evening. 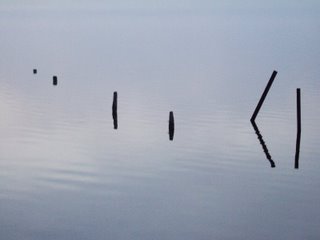