So it’s been ages since I posted any fishing trips. It’s not that I haven’t been fishing. On the contrary, I’ve been fishing a lot. I took a psychological blow (!) when my last update crashed after typing for ages (my fault for not backing it up as I went) which together with my craptastic computer have held me back. I have a new computer coming though, so expect much more frequent updates to start soon.

In the meantime, I returned from the second mamoth fishing expedition inside of 2 weeks yesterday. The first one has already had a grand write up which I have a go at myself soon. This latest trip took in a couple of the same rivers, this time accompanied by my fine brother. The plan was to camp and fish and catch. However if there’s one thing I have really learnt about fly fishing, it’s to never ever go fishing with expectations of anything. Just be prepared for whatever happens and be happy to be out there. I try to live by this wee mantra, but I usually end up getting annoyed with myself all the same when I feel I’m particularly cocking up (this is quite often). So all of this to say it wasn’t exactly spectacular fishing wise, but once again it was a fine old trip with much jolity and even some sunburn. And I got plenty time for more bug photos.

The first day we blanked. Lost a couple wee fish, but all in all very quiet. Almost no rises all day, which was quite different to the previous trip. There were gazillions of terrestrials about and even a good few sedges and some olives, but they were never on the water in enough numbers to encourage a proper rise. It was good to see some soldier beetles ambling around. They really look fantastic under a macro lens. I actually have an imitation of this bug in my fly box, though I’ve never used it. 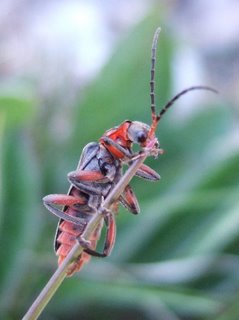 Don’t know what these guys were.. green beetle was as technical as I fancied. 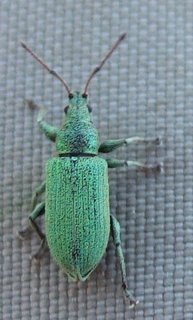 We stayed late but still no rise. Probably the burning sunshine didn’t help much, though it was pretty nice to be out in warm weather for a change. In the end I just opted for the “sit it out” approach. I recommend it highly. 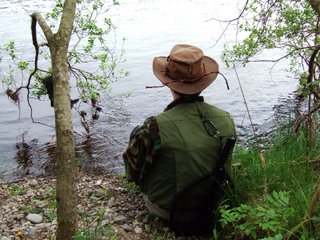 Next two days we were on a nice beat of another highland river. Things got off to a flying start with both of us catching nice fish within half an hour. My my I thought, this could be a cricket score. And here lies another lesson of fly fishing I have learnt. Never count your chickens before they’ve squwawked. Despite another couple of nice fish, I caught nothing for the whole afternoon or evening (or the next day). In truth the river was very quiet, but later on there were a few fish moving, and I even had a few casts to a really nice fish (by which I mean several pounds) but I did my classic cock-up cast and couldn’t raise him. He did at one stage take a damn good look at my fly, but something wasnae right (drag drag…..)

Now this particular river is known for being quite rich in aquatic life. Strewth that’s no joke. Never before have I seen so many cased caddis larae. In the shallow parts the stones on the river bed were literally covered in them. Made me feel guilty of wading to be honest. 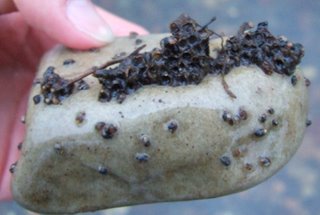 Quite surprisingly though there were almost no upwinged flies at all the whole two days.. Possibly the time of year meant there was a transition from the large spring hatches to the BWO hatches of the summer. There were quite a few sedges about, but only right at the tail end of the day. It was then that the better fish started to occasionally show themselves with those brilliant plopping rises. I’m not sure, but I think these fish are taking sedges as they’re about to emerge. I’m currently experimenting with a pattern I hope will do well in these situations.. we shall see.
The broth managed a few nice wee fish on a DHS, which is also a good pattern for any kind of sedge rise. 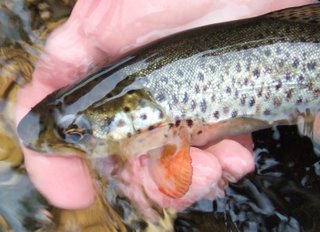 We awoke next day to find a totally different day. Overcast, drizzly and (once again) dour. Things weren’t helped much by a poor effort at the porridge on my part. 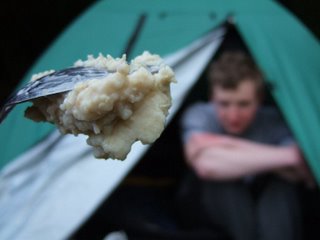 For those who’ve never made porridge, it shouldn’t look like that.

Again there were a good few terrestrials about on this river. Some hawthorn flies were still lingering in the bushes and grass by the river, and seemed to be doing a good job of avoiding the trout.

That’s another pattern I’ve yet to use. I have hope yet though that one day it will catch me a big trout.
This was another day to spend watching the river (they all are really), by which I mean not really fishing as much as I should have. I think this kind of fishing (which a lot of my fishing is) might partly explain why I sometimes get so cock-a-doodle when I actually find a decent fish rising. It’s just so damn exciting! I asked this bunch of twigs what they thought, and they agreed that’s my problem. 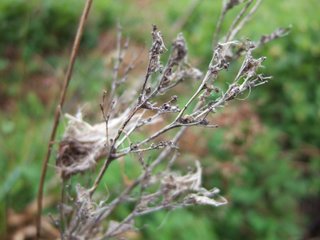