The trip that was, wasn’t and then was (Part II)

If there are any folks reading that have never been to Scotland, or who know little about fishing in this lovely country, perhaps this post will give a wee suggestion of why I love it here so much.

On Saterday afternoon the weekend’s fishing took a turn for the hills. We were to head up a remote burn (that’s a small stream for anyone not from around here) and to a tiny wee lochan to fish for wild brownies. 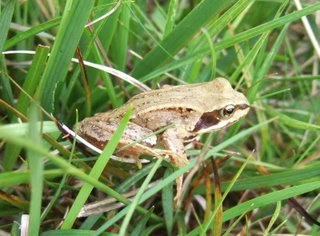 This fellow had the cheek to ask for a permit. I gave him a superbly tied DHS and that seemed to bribe him enough.

Taking our time in the blazing heat of early afternoon we stopped off for ice cream and a visit to the nearest chippy. This would prove to be a sly move due to some ration issues later on. An hour or so later and we were leaving the car and heading up the burn. Occasional drifts of cloud were welcome relief for us and maybe the fish too. 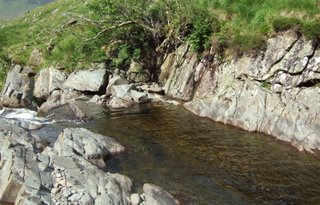 My my this was a cracking little place. Places really, because everywhere you looked there was just great fishy fly water. We knew the fish would be small, but that was part of the joy. Brother was first tackled up and fishing a stunning wee plunge pool. 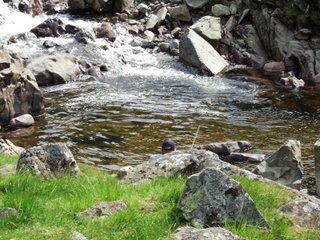 Almost straight away a wee trutta dashed out and tried to grab the size 18 sedge I had tied up a few nights before. A couple more drifts and another take. An absolutely rediculous fight ensued with the fish convinced he was some kind of giant lightening bolt.

Managed to calm him down for about 3 seconds, just time for a snap and away he went. At this stage I was about as excited as I have been for a long long time. I know some may find that a little odd given the modest size of the quarry, but for me burns are where it’s at. Along with the fact that we were in the middle of nowhere and these fish had probably never been fished for it was just wonderful. It’s not a way I feel that often and I savoured the moment. Things just felt perfect.

I opted for the “I’m a real man” approach and stuck on a tiny wee nymph. Time for some busy upstream nymphing practice. This was absolutely fantastic fun. At times it was a challange with the fast turbulent water but quite often the fish took the fly very obviously just under the surface, so that you could see a clear flash of the take. 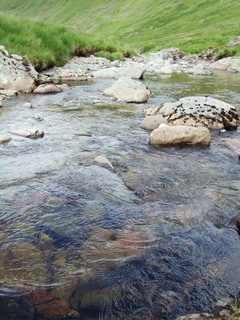 As the picture shows the water was clear and swift. Great water for getting really close to likely lies and fishing with almost only the leader out the rod tip. And for a change I found that almost every likely lie held a fish, who would almost always have a go at the fly. Typical upland fishing this, and simply fantastic fun. 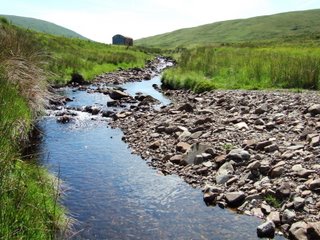 For me there could be no better way to introduce someone, of any age, to fly fishing than taking them to a burn like this. I think it gives you a great insight into what it’s really about, for me anyway. No pellets, no bag limits, no tailless misery. And to be honest, it sets out right away that fishing is about more than expectations of big easy fish. True, the trout in burns like this are not difficult to catch, as long as you approach the fishing with a modicum of stealth and cast carefully. Many times all we saw when approaching a pool were little brown topedoes bolting for cover. That sort of visual lesson soon gets learnt. 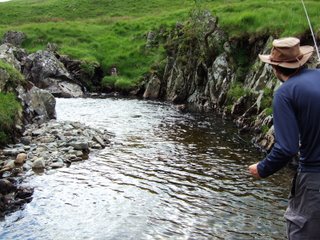 Amazingly the fishing seemed to get better the further up the burn we went. Many places it was one stride wide, and in such cases it was usually very obvious where the fish would be lying. Again brother managed the best fish, an absolutely stunning fish than just gleamed brown and gold in the afternoon sun. 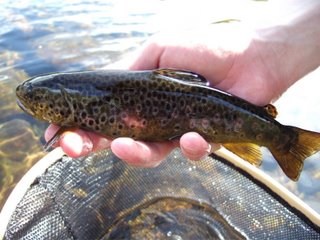 There really not much I find more satisfying in life and fishing than seeing a fish like that caught from a remote little burn. He was maybe half a pound, but the fight he gave was just insane. Take a gander at that tail fin! 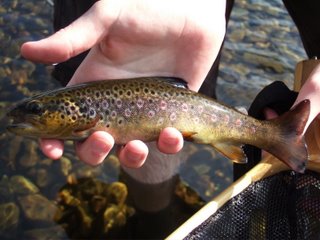 After a good few hours working our way up we managed to pull ourselves away and strike on for the loch. We needed some dinner and to set up the tent, and I was feeling paranoid about a possible midgy attack. Unbelievably I hardly saw a single midge in the end, even in the flat calm that descended on the loch around 9pm. The gods were really grinning on us this weekend. 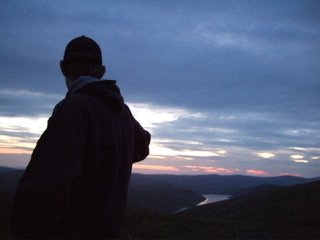 We took a short excursion to watch the sunset over a distant loch before returning to fish into darkness. No monsters caught this time but I know they are there.

If you’ve never been to my country let me tell you there are hundreds and thousands of wee lochans and burns full of feisty little trout. Sometimes you just fish and watch the landscape and think life can be wonderful. The fishing is only part of the experience, but together with the hills and clear highland air it can be really special.
There are also some places with feisty big trout, but I’ll save those for another time.