Death bombs and the end times

It seems the weather here in the UK is throwing a tantrum at the thought of leaving another year behind. Driving wind, pouring rain, all things that are terrific for getting the grayling going. I’ve been staying with family for the past week or so, and have finally got into tying up some flies. Actually, that’s possibly stetching it a little, because these fellas are serious bomb bugs. When grayling bugging I quite often use a very heavy ‘nymph’ on the middle dropper which acts like an anchor, taking the whole cast down quickly. These things don’t resemble any kind of traditional fly fishing creation. They’re big and nasty, and are likely to cause mild concussion if your casting’s a bit off. 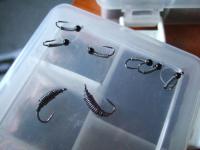 Other flies have been hare’s ear nymphs with tungsten heads, in various sizes and with a range of extra leading. This winter I’m going for a fairly simple approach to my grayling fishing. One heavy fly, one hare’s ear fly, one pink fly. The pink flies were made up on the spot. Nothing special, just pink floss and a hare’s ear thorax. But I’m going to name the pattern anyway: “mik’s pinky”. It’s got a nice sound to it. 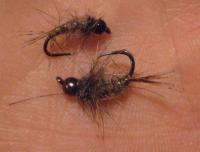 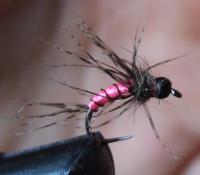 There’ll be other flies of course. My old woven polish nymphs and some Czech style bugs, but the more fishing I do the simpler I like things to be. I reckon if a grayling is going to take a bug, he’ll take a nice hare’s ear as readily as anything. If he sees a pink fly first, he might dive straight at that instead. And if all that fails (surely not), the bomb fly will probably knock him clean out. Done, sorted, no problem.

Except for the egg flies. Been meaning to try these for a while now, and finally tied some up yesterday. They look remarkably like boobies, but of course they’re highly imitative and designed to arouse the attention of grayling gorging themselves on salmon eggs. I know of at least one (very good) angler who has had success with these in recent times. I also know another angler who hates pink flies and says you’ve got to be desparate to use them. That’s just about fine with me.

In other news, tonight is new year’s eve. I mentioned recently that I used to live in the Far East. New year in the Philippines puts the tame efforts of the UK to shame. Several years spent there have almost certainly pre-disposed me to lung cancer from excessive inhalation of firework fumes. I can’t really describe what it’s like. War zone, end of the world, total annhialation come pretty close.

Today I’ve been thinking back over the last year, remembering the good times. There were quite a few, almost all of which involved a fly rod. My Northern trip was probably the finest couple of weeks, with some truly memorable evenings spent fishing dry sedges to gulping loch brownies. One of my trips down to a favourite bit of river also stands out. I can remember the tiny dimples the trout made as they sucked down the BWO spinners.

Wherever and whatever this new year brings, I hope we all have good health and some lovely fishing. Happy new year!