A running saga in my fising for the last year or two has been the quest for the perfect fly line – leader system. It’s been an epic journey, but perhaps the end of the road is near.

For 90% or more of my fishing I use a floating line with a tapered mono leader. In the dark old days I was conned into using those evil braided loops to connect the leader to the fly line with a loop-to-loop knot. It wasn’t pretty but it sufficed for a year or two. Then I became aware of other ways of setting up this connection, and I’ve been experimenting for a while now. 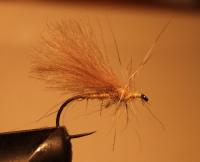 The very neatest method I’ve found is the Dave Whitlock superglue connection. This definitely provides the smoothest connection I’ve seen. The fly line – leader join usually slides seamlessly through the rod rings. Having using this for most of last season, there are only two points I’m not convinced about. The first is that the fly line tends to crack where the leader is inserted. This may be because the extra stiffness imparted to the fly line at the join leads to a hinging effect, so that repeated casting degrades the connection. Talking to a pal about this the other day it seems he hasn’t had a problem. I’m pretty sure this must therefore be down to my sickly tight razor-loops. The fly line cracking has the knock-on effect of encouraging the tip to sink slightly, which can be annoying.

The second issue is that, because you are connecting a tapered leader directly to the fly line, it’s not easy to swap the floating leader for something like a sinking-tip. I don’t feel the need to do this very often, but if things are particularly slow then fishing a giant wooly bugger on a fast-sinking-tip can sometimes be fun.

So the quest has been for a system where you have connections that are as seamless as possible, while allowing enough versatility for changing between regular leaders and sinking tips.

I think the answer may be to use a semi-permanent ‘butt’ section of very thick mono. I’ve been playing around with a sea-fishing line called Amnesia of late, after a recomendation from an internet forum. You get this stuff in 15, 20 and 25lb breaking strains, and it’s main attribute is that it’s got significantly less memory than other lines of similar diameter. I’ve gone for the 25lb (0.52mm) option, in black. It seems about right in stiffness and diameter for a 5 weight line, and the black colour helps to show up the quality of your knots rather nicely. 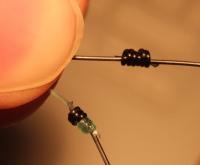 My favourite discovery, however, has been the Tie Fast nail knot tool (scroll down if you want to see it). This makes nail knots an absolute piece of piss. You can also do rather snazzy nail knot splices which join together two sections of mono. I love a good knot, probably more than the average bloke, and this one displays a beautiful symmetry and is extremely strong. Normally I use a simple figure-8 knot for joining thin tippet sections together whilst on the river, but I’m considering playing around with hand-tied leaders and the nail knot splices look really nice.

So what I’m thinking is that a 12-18″ butt section of Anmesia will form a semi-permanent butt section, glued into the fly line. Tapered leaders can then be nail knotted to this section, as can connections for those sink-tip leaders. The idea of this is to deplete the butt section, and not your 30 quid fly line, every time you fancy a change of setup. Eventually you’ll need to hack at the fly line, but much less often. I’m not sure The System is quite perfect yet, but by the middle of next season I will know. There’s nothing particularly unique about all this, I’m sure many folks use their own Systems which are very similar. But of course it’s all part of the game, discovering things yourself for the first time.