A wee while back I was musing about the ultimate fly line and leader system. Having been well served by a permanent tapered leader glued into the fly line I was thinking about ways to incorporate fast sinking poly-leaders for fishing streamers. Since then I’ve been around the block and have come to the conclusion that the nice tapered leader is simply the best way for fishing normal wet and dry flies, and there just isn’t a good way to attach leaders with a loop-to-loop.

This season I’m going to fish sinking poly-leaders looped onto an intermediate fly line. This will live on a spare spool dedicated for the job. I think it solves the problems in the simplest way possible, which is of course a good thing. It also leaves my floater un-bastarised and happy to present dry flies without ka-tunking onto the water.

This means that I’ve been on a quest for the ultimate loop-to-loop connection. In the bad old days a braided loop would have been the obvious way. I’ve lately gone off these things, though it has to be said I haven’t had as many problems with them as some folks. I just don’t like them aesthetically any more. That glued-in connection on my floaters showed me the way to Amarillo. 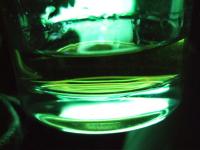 A couple seasons back there was an article in a magazine about making loops on fly lines with cigy lighters. I read it with interest, but never got round to try it out. The idea is that by encasing a small loop of fly line inside some electrical heat-shrink tubing it’s possible to melt the PVC coating on the adjacent strands of line and so fuse them together to form a seamless loop. I finally gave it a go the other day, and was pleasantly surprised with the results. Only a few inches of fly line buggered up, and with a little practice a pretty sweet looking loop.

Some fly fishing buffs have suggested that having a loop like this is a bad idea for fishing a floating line and dry flies, and I’m inclined to agree. For sinking lines and poly-leader connections, however, I reckon it’s about perfect. By skipping out on the braided loops you’re left with a pure fly-line to fly-line connection which looks pretty tasty.

We’ll see if any of this holds up in real fishing. My adventurous attempts at perfecting a deep-nymphing bite detection system didn’t exactly produce storming results this winter, so confidence isn’t as high as one would hope. 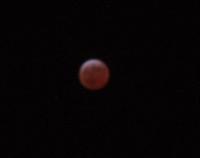 In other news, the eclipse a couple nights ago was amazing. Watched it happen from my kitchen window. It’s not difficult to see how this kind of thing would instill a sense of foreboding.