You are currently browsing the monthly archive for April 2008.

The Duck Swims Off

Well it’s been a while coming but I got out onto a favourite urban river three times last week. The first two trips were spectacular failures without even a hint of a fish in the whole river. For the third trip a couple of lucky pals showed me the way to one or two hot spots.. 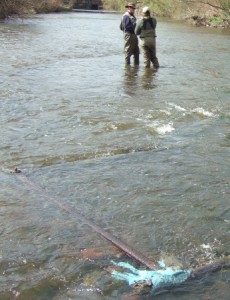 Like a lot of places this season (so it seems) there were a few olives around but the fish were a pretty big no-show on the surface. Through extreme good fortune I spotted a single rise in a wee run close to where my pals were standing and skulked off downstream. I now confess to my sin of fishing the duo successfully and catching him from the eye of the pool on a nymph.

I had one more from a similar run a little further downstream, but all-in-all it was a very difficult day. The Lucky Ones headed off to a wee burn later in the day, but I had an inkling to stay put and spent the next two hours watching brown water slide by, unimpeded by rising trout (ok there was a single rise which I proceeded to target, hook the fish and promptly loose him).

Things can only get better.

The Diary of Future Past

One of the great things about writing a fishing blog is that it gives you a near-permanent record of the season’s fishing exploits. I often scroll through my old blog posts recalling trips and thoughts. It’s a funny process really, a bit narcissistic, but it’s also very enlightening. It’s possible to ‘chart’ the evolution of one’s fishing life, with all the highs and lows, the glory and the disaster.

The only problem is that it’s actually quite a bit of effort to keep a blog updated (eh…), and so inevitably one doesn’t record all a season’s trips. The real nitty-gritty detail of a trip is also lost on a blog: stuff like the atmospheric pressure, the temperature and the colour of my socks. I’ve been thinking about this quite a bit lately: there are bound to be some hidden jewels of fishy information in those lost and under-reported trips.

I think the solution is the Diary of Future Past. A concise, all-encompassing record of every fishing trip I make. We’re talking hardware here folks, the real stuff, not just 1’s and 0’s and digital trickery. It’s the kind of record the real folks of old used to keep, the kind you can carry around and flick over whilst on the bus. I’ve been meaning to do so myself for the past couple of seasons, but it’s only now that I’ve discovered the secret to making good such ambitious intentions. Preparation, preparation, preparation.

In my old folly I thought a simple notebook would suffice. A few ruled lines, a ballpoint pen and a little determination. But the time folks, oh the time. I am really just as lazy as the next man, and it just takes too much time to start a fishing report with a totally blank sheet of paper. I need a little prodding, and the Diary of Future Past prods nicely. 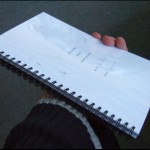 There are lots of commercial fishing diaries out there, but the ones I’ve seen are rather expensive, not very good and full of advertising. So I decided to make one myself, using the glory of JFig, my printer at work and the lovely folks in the graphics and photocopying wizardry department of the University of Edinburgh. The lovely thing about making your own diary is that you can include precisely the empty spaces you want. There are also no adverts, dodgy photographs or deeply inspiring quotes from Robert Redford. It’s a diary without the fat and cholesterol, streamlined to sharply prod me into faithful adherence. 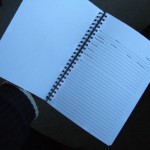 I think I’ve included the most important stuff: empty spaces for the date, details about the weather, the general hatch and trout activity, notes about the flies I used and plenty of space for meanderous wanderings. The Diary is A5 size, so it’s nice and portable, with a stiff cardboard backing and clear plastic covers. Each report has two pages: one with the writing, and a second on the back available to stick in wee photos if desired. Book one has space for 83 diary entries, which should see me through a season or two. I reckon it should be possible to file a report in about ten minutes, which fits nicely into my morning turd regime. No more excuses.

It’s not fishing, but it is amazing.

I saw something this weekend to make your eyes widen and your pee turn slightly purple. I was on a wee single track road in the west highlands, checking out a loch I want to fish. Suddenly a sheep came zipping past, faster than I ever realised a sheep could travel (that wasn’t in shrink wrap in the back of a Sainsbury’s lorry). A swift, slightly manic`bound’ I would say. About two seconds later a pair of collies tore past me and bolted up the grassy bank to try and cut off the sheep’s escape route. The whole shebang then ensued, around the corner, before replaying in the opposite direction as once more the sheep bounced past me along the road with the dogs in eager chase. This time, however, there was a cattle grid fifty yards down the road. I expected the sheep to come to a spluttering halt, but instead she jumped clean over the grid and careered off down the road. Even the wily dogs were careful enough to go through the large open gate right next to the grid.

For the last two days I’ve woken up with this bizarre image in my mind of that fluff ball of a sheep in mid-air over the cattle grid. I went to check it out, and it was longer than I am tall, which must make it at least 2 metres. That is some sheep.

Fishing this weekend I hope. Then it’ll be back to real blog posts and not this kind of sheepishness.