Bang for your buck

It was tough going today. This year it seems winter has frog-leaped spring right into summer. It was well into the 20s by early afternoon, with a few frothy clouds and almost unbroken sunshine. It was only a few weeks ago that I was up Stob Ghabhar with ice axe and crampons. Crazy stuff. 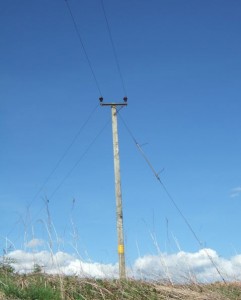 The day was spent on my favourite bit of water. On Tuesday I had nicked down to check it out, more a gentle ‘hello again’ than anything, and it was very quiet. Today it was also quiet. A couple of olive uprights flitted around (ok, medium olives…), both newly hatched and spinners, but the trout were very reluctant to go anywhere near the surface. The few I did tempt were all dropped off (bar one) which added to a frustrating day. My pal Alistair witnessed first hand two of my failures, which was obviously damaging to my already-shrunken ego.

It really was a bit strange today. Plenty of trees still in their spindly winter state, but baking sunshine at the same time along with a river that looked six months early in flow and weed growth. As Alistair asked on more than one occasion: where is spring?

Even Alex didn’t do very well. This means only the one two-pounder and a smattering of smaller stuff. Holy shit does that man fish hard… which brings me onto the main purpose of this blether: the dry-dropper method.

Last season I (somewhat begrudgingly) had a proper go at fishing a nymph suspended from the hook bend of a bushy dry fly. It turned out to be a great success, and I caught loads of grayling and quite a few nice trout. I certainly caught fish in situations I would never have caught them before with my preferred single dry fly. Examples include blind fishing through riffles with little obvious surface activity, and blind fishing through deep, fast runs. 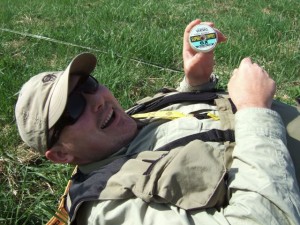 Neither Alistair nor myself like this method of fishing very much. Casting is at best ungamely (particularly with bead heads), and within a short while I find myself yearning for the simple control of a single dry. It’s a method which isn’t really nymphing, and isn’t really dry fly fishing, and many would argue that this is precisely why it is so good. Who am I to disagree? I might have tried once, before that is, I spent any length of time fishing with Alex. He fishes this method, as far as I can tell, almost exclusively and catches astoundingly well. He is a genuine fish machine.

This evening I got to thinking about the method, and some of the other methods for nymph fishing, and came to the horrible conclusion that for sub-surface fly fishing there really isn’t a more effective way to fish. In certain situations, like a heavy hatch or in the middle of winter, there might be other more suitable techniques. But I really struggled to avoid the thought that for the absolute best bang-for-your-buck there isn’t anything to touch the dry-dropper style.

I mean this as a general statement that covers a sort of ‘average’ of all fishing situations. Approach any river at a random time and this technique just seems to have the perfect combination of user-friendliness and reliability.

Earlier this week I got round to having a go at true upstream wet fly fishing with a couple of simple spiders. This style really appeals to me, but it certainly isn’t easy. I fished quite hard and didn’t touch anything but weed. At the end of the day I tried a dry-dropper setup and immediately caught a fish. The dry just bobbed slightly and I was in. What more can an angler ask for in a method? I still think there is mileage in getting good with the upstream wets, but at times it’s difficult to stop myself from the thought that I may as well stick a dry-dropper on and have done with it.

In this photo my good pal has managed to lift up a large chunk of metal and carefully place it on top of my leader, paralysing my ability to catch fish

Again today I spent a good hour watching the water for rises, with nothing showing at all. I then tackled up a little tungsten-headed hare’s ear under a deer hair sedge and on the third cast hooked a trout on the nymph. The take was easy to spot: the dry dived under the water, I struck and he was on. Certainly a hell of a lot easier than the kind of dumbfounded confusion I feel when fishing upstream wets.

One of my fishing pals is a superb upstream nymph fisherman. I remember fishing hard through a nice grayling pool one winter day without a single fish. He came in after both my brother and I had tried the pool twice each, and immediately caught a lovely fish. We were all fishing heavy nymphs, but he was a long way ahead of us in terms of really fishing the water.

Perhaps I just need to force myself to fish upstream wets and nymphs whenever I would otherwise fish a dry-dropper. The aforementioned pal said it was only a matter of practice to get good at spotting takes, so perhaps the whole escapade just requires a bit of patience. As with so many things in fishing it’s just a matter of taste. At the moment I think I’m rejecting the dry-dropper thing out of mild arrogance as well as the aesthetic issues. But in the end it will be interesting to see if I can persevere, or if the lure of actually catching fish proves too much.