It’s always nice to go fishing with a couple of pals. It’s even nicer if you’re having a mini-reunion on a favourite stretch of river with a wee band of lads who haven’t fished together for more than a year.

A week or two ago Emanuelle, the Italian DFM (Dry Fly Master), made the trip up to bonny Scotland from jolly Engerland to fish with Alistair and I on a glorious highland river. They made a weekend of it (apparently without anything large and dark in colour) but I could only join them for a day, so bolted up the road one morning, arriving at the permit shop around half nine and just in time for the the olives.

I love the feeling of excitement when you speak to a fishing pal on the phone who’s already on the river. They describe the current conditions, giving a tantalising glimpse of what’s happening, and so setting off an incredible burst of eagerness to finish buying lunch and the day ticket and to get on down to the water. Speed restrictions and road works, especially following such a conversation, never feel as frustrating as when they impede travel to the side of a river…

I pulled my car up as the DFM was stringing up some dodgy Sage belonging to Alistair. Our attention was immediately drawn to the river and the regular rising of several trout. The sky was piercing blue in the morning light. Dropping my gaze down to the mountain fringed horizon and on to the glistening river surface, the view was spectacular. The greedy slurp of a trout in a crinkly little creese just upstream rounded off one of the most soul warming scenes an angler in Scotland could hope to see. 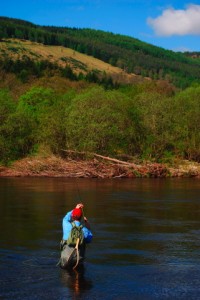 The Italian Sage Swinger was first in the water, and quickly caught a couple of nice brownies on the dry. It must be said at this point that the smile on his face was truly something to behold. I just about caught sight of the end of it as it disappeared over the hill, presumably towards Rome or Milan. Fishing with pals sometimes gives you a chance to share in someone else’s unbridled joy. It sometime gives you the chance to feel the disturbing murmuring of murderous jealousy and rage as well, but on this occasion it was the certainly former.

I got up to the crease and started chucking out the usual fluff. Three nice trout obliged my offer in quick succession, and I began to feel that little surge of self-confidence that comes right before a fall. The fall was twofold: I slightly overbalanced from the ledge I was perched on and almost fell in, and then the next trout didn’t like my flies. I switched to a smaller fly, something with CDC in it (go smaller, smaller…!) and a few casts later it was sucked under and the best trout of the lot came to the net. Still nothing enormous, but the steady action was exactly what was needed after a fairly itty-bitty start to the season.

Around half eleven the hatch trickled off and the trout mooched on down to the pub on the bottom of the river. The stiffening easterly didn’t help matter either, and we began to contemplate a shift of location. This idea was soon firmed up as the (apparently lucid) gentleman salmon angler who had been watching us cast to rising fish decided to switch to his trout rod and wade in to the river about 15 meters above our Italian dry fly hero. We exchanged confused glances that quickly morphed into steely glares as the gentleman requested that we make up his sandwiches and rub sun tan lotion into his neck. (The last sentence may be a slight fudging of reality, but by this time it seemed the laws of normal reality and interpersonal cordiality had long broken down so don’t blame me.)

We bolted off up river to a promising run, but the still-stiffening east hoolie gave us second thoughts as the river was quite exposed. It our collective confusion Alistair and I turned to the Master for ideas, and he suggested a little spot he knew. We arrived at the spot twenty minutes later and bushwacked our way through wild vegetation to reach a point of the river a few hundred yards downstream of where we started.. Of course we bowed to the Master, who certainly knows this river better than I, and we started fishing.

Nothing moved at all, except for the micro-parr that seemed to be suicidally throwing themselves between the rocks at the edge of the water. Even the dark horse streamers didn’t produce anything, so eventually I resorted to a favourite searching pattern and started some casting practice. By some incredible twist of luck I managed to put my fly over a grayling without spooking him, and he enthusiastically grabbed the fly. It’s not really a good time of year to catch grayling, so I got him back as quickly as possible. Interestingly enough he did put up a serious scrap though, despite the obvious sexiness on his mind.

I ended up having a pretty successful day, in conditions that were excellent to start with but which quickly tailed off. Even in May, it seems, the hatches are already concentrating into short spells in the morning. It really payed to be on the river early enough to see flies moving, which is something I must remember for next year.

Enamuelle did pretty well too, despite disgracefully abandoning his dry fly ethics at one stage and opting for the some nymphy abominations. He even caught a fish, and to be honest I can hardly begrudge the man, for it was a great day spent in good company and spirit, with the old Northern master returning to catch again.