The season is now open on all rivers. Today I kicked off my own fishing year by wandering down to a local small stream for a few lazy hours. Over the past 24 hours or so we’ve had a bit of rain, so I was expecting there to be a good bit of water pushing through. Indeed the river was a bit coloured, but not overly high. The pale brown tinge emphasised the early season feel, complementing the blustery breeze and fleeting sunshine. 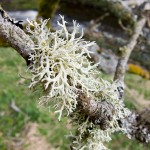 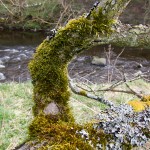 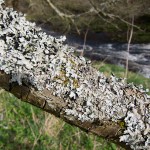 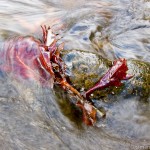 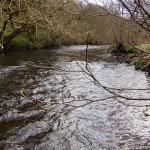 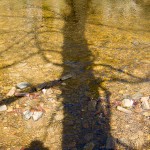 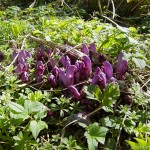 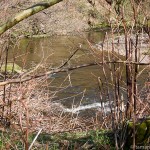 I saw 5 upwinged flies in 4 hours of pottering about. Not exactly a bonanza hatch, but a warming reminder that the time is fast coming where dry flies may be used without irony.

I started off with a tungsten-beadhead nondescript nymph. I lost it first cast in the branches above my head. The lovely orange indicator/float I intended to use for take detection immediately pinged off and sailed away downstream as I hopelessly jiggered the rod trying to free the nymph. The distinct feeling of the season passing early comment on my dubious methods passed over along with darkening clouds and a stiffening wind.

I decided to replace the beadhead job with a more castable nymph, and second cast a pretty little brownie gobbled it up. Such quick success, sometimes a good omen, but generally not.

First cast after returning the trout and another encounter with an overhanging branch. Another attempted jiggle of the line and another pinged indicator. I made a mental note to head up the hill later on to stock up on sheep’s wool, these modern mini-football indicators just don’t stay on fine tippet very well.

For the rest of the day I opted for the comedy dry fly routine, and fished a wee dirty duster. This felt much better balanced on my light line setup, and I finally started to remember how the whole casting thing was supposed to work. Moments later and a single rise spotted. First cast truly dreadful, an over-gunned, under-slacked cockup job. Second cast and a rise and take, hooked for a few moments then lost. Would have been slightly larger than the first, but nothing remarkable. No worries, there aren’t that many remarkable fish in this bit of river anyway. At least I’ve never come across any.

I gave up about 4pm, opting for a relaxing evening of watching clouds (see next post). Luckily, we’ve got lots of them around here, and plenty big ones at that.