Anyone for a bath?

Things have been hot recently. Weather wise I should add. It seems there’s been continuous sunshine for weeks and all my regular rivers are looking thin and summer silky. 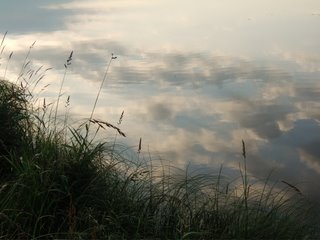 I managed to fish three days in a row this weekend, down on my favourite bit of water. We spread things out so no water was fished more than once. Turned out to be a fascinating run of fishing. I think it highlighted some important things to me, which I may have ‘known’ already but are best learnt with real experience. 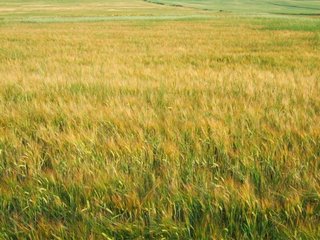 First night it was hot, with a little breeze to start with. We headed to a bit of river we haven’t fished before, but were dissapointed to find it was poor fly water. Actually it was more reminiscent of a narrow loch, the surface rippled in the wind. Not the nice streamy pocket water we usually fish. The water temperature was just about right for simmering bulgar wheat, so we walked and walked in search of riffly water. I felt smug that my decision to wet-wade was not going to be regretted.

Eventually came to a cracking pool, with dozens of channels between streamer weed and rocks. I waited whilst the brother fished the nice bits. As he was flicking the fly line out of the rod tip, the fly (a standard DHS, superbly tied once again) landed a couple of rod lengths ahead in some slow flowing water. A nice fish slashed at it and a Class A Bullet Strike followed, sending him packing to his bolt hole. 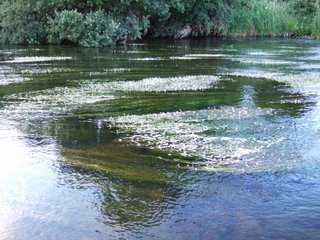 I ambled upstream finding more dead water and some enthusiastic parr feading on floating fag ends and anything else on the surface. It wasn’t until the sun was well gone, maybe 10.15, when I noticed some nice fish moving in a pool just downstream. I crept up and watched. There were mini-submarines in that pool. Big swirling wakes were all I saw of the fish as they supped down sedges and BWO spinners. One fish was well over 2lb judging by the water displacement, the other at least 2lb. Casting to them was just about impossible due to wading issues and sh!te casting ability on my part. So I accepted as much and enjoyed the knowledge that I’d found some whoppers. 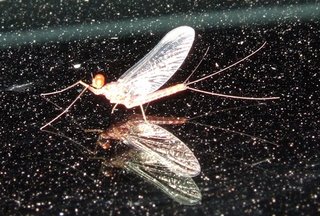 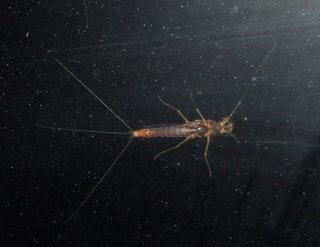 These photos are of a BWO male spinner. As far as I know they don’t feature much in an evening rise, as it’s the females that lay eggs and die on the water. I think sherry spinners are much more vividly orange as well.

Next day and some serious fly tying took up a good bit of the day. I think I’ve cracked those DHEs. Seem to turn out well every time now. I tied a few with a bit of fluff to suggest a shuck. Not sure if that makes sod-all difference but I felt slightly intelligent doing so. 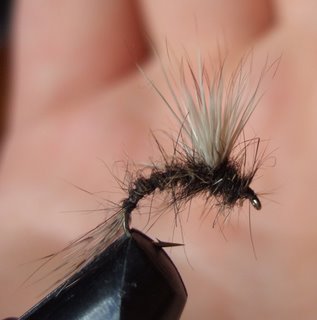 The weather was a little more cloudy this evening, and very humid. We were fishing at the bottom end of our more usual beat, again an area we haven’t fished much. A couple fish rose lazily, and I felt chuffed to catch a nice one of around 10oz to the DHE above. The brother had a few throughout the evening, to the DHS. 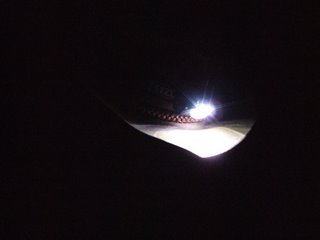 Something we both noticed was that drag was even more of an issue than normal, and it’s normally difficult to control. We reckoned the low water was making things worse, as the surface of the pools and flats we fished was always very ‘swirly’ if you catch my drift. Of course all rivers are swirly, but this was noticibly difficult. I thought about things for a very long time and came up with an amazing formula:

Next night I opted for a longer leader than usual, probably around 15′, with oodles of limp tippet (if you know what I mean). This definitely helped the drag issues (of course), but my hyper-crap casting made controlling where the fly went interesting. This was worst when casting only a couple of feet of fly line, fishing pocket water at close range. 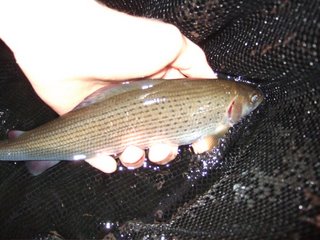 Interestingly I caught a grayling, which seem quite rare where I fish. I see Ali had a similar experience the other night. Total fluke on my part, I was just beginning to drag the size 12 DHS across the water to cast again. Late on the fish really started to show, taking some of the BWO spinners that had returned. Definitely some caenis feeding going on as well. And some sedge feeding fish, so all in all quite good given the tepid water. 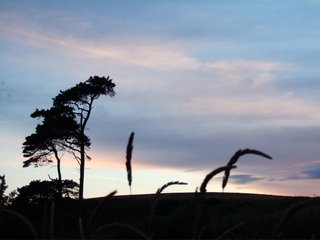 So fishing three days in a row at this time of year taught me a lot. The importance of timing of course. At no stage was it really worth fishing before 9pm. Peak of any rising was 10-11pm. Spinner feeding fish are a damned arse to cast to when you’re fishing a long leader and can’t see a thing. Caenis feeding fish take the piss. Give me a sedge feeder any day, please. At least until my casting gets better (it will I hope).

And each night it was quite different. First night some rises, very late on. Second night not much, despite apparently better conditions. Third night the best by a mile, as there were more flies on the water. Just shows how much you miss out on by fishing only once a week. Solution: fish every day.