Last week I met up with a pal of mine for a spot of urban fly fishing. We headed down the River Almond in Edinburgh, a really pretty river which has seen a lot of persecution over the years. I’m aware of at least 2 significant fish kills on the river in the last 2 seasons, from diesel fuel and industrial chemicals. Amazingly some fish stick it out, and can provide a nice distraction for a quick evening session. I’ll be paying close attention to things on this river in the coming seasons, and really hope it gets a bit of a clean run of health. 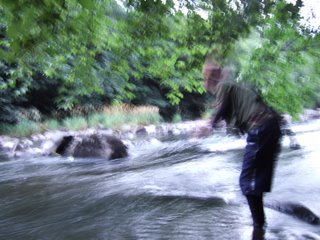 We got down for around 8pm, and I tackled up a little nymph to fish through the pockets of water. It was quite difficult fishing, with plenty of current tongues to drag your line around. I soon found a cracking looking spot in front of a nicely angled boulder which slowed the river current a little. It was one of those times where you absolutely know there is a fish lying there, even though you can’t see him. 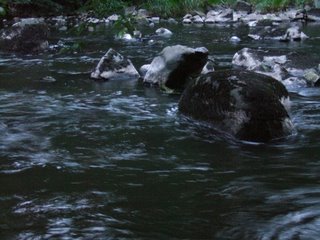 It took a bit of inventive casting/chucking of the nymph, but eventually I got a really nice drift. It was really difficult to see the leader, so I wasn’t sure how I was going to detect a take. Then something wierd happened, a bit like an experience had a few months back on a similar urban river. The feeling struck, and I struck, and the fish stuck. Worth practising this nymphing lark. 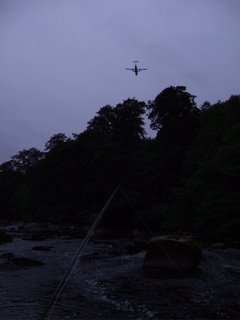 Now a good part of this river is very close to Edinburgh airport, and you certainly know about it fishing in the evenings. I know Alistair has plenty to say about urban fly fishing, but this was hardcore! Planes, planes everywhere, every two minutes rushing a couple hundred feet over our heads. At first it was exciting. Then it was a little tedious. Then it began to get downright annoying. We do suffer for our sport 😉 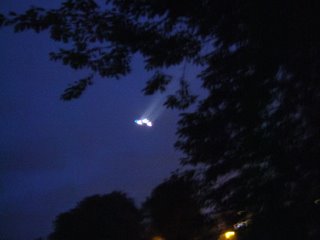 It was getting pretty late, so we found a nice run and tackled up some big scary flies, hoping for a passing sea trout. After a good while of fruitless casting, I opted rather bizzarly to do some extreme roll casting practice. Not a pretty sight, especially when there’s a size 8 longshank muddler minnow on the end of the cast. 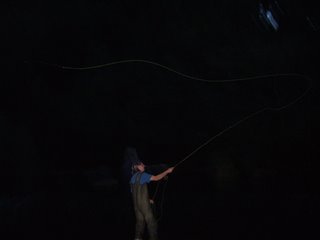 Actually this photo isn’t me, but my pal had better loops than me tonight 🙂

Once the water was almost completely churned up by the beautiful presentation I was getting, the fly was left dangling in the current whilst we had a natter about something or other. Probably the damn aeroplanes. Out of nowhere the line tightened sharply, and I was into a fish. For just a split second I thought maybe, maybe it’s a sea trout. But it turned out to be a feisty brownie of a nice 3/4lb. Really good for this bit of river. We decided I’d reached a new nirvana of fishing, where I hook fish without even meaning to. 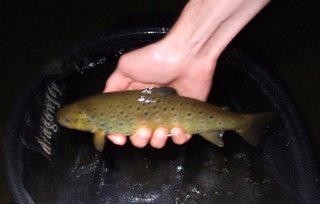 In case you’re wondering, he was bigger than he looks here. 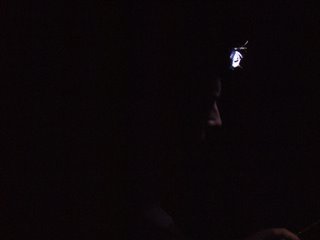 It was now getting late, and nothing more was showing so it was on with the headtorches and back home. The moon made a lovely view as it rose upriver. 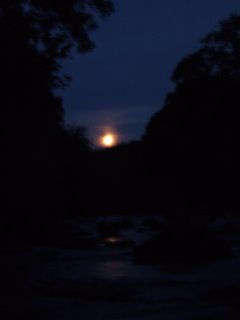