Once in a red moon

I’ve been making up for some of the lack of fishing I did mid-season and managed to fish 4 days in a row from the end of last week. It’s amazing how much better I feel I’ve been fishing. Just a bit of consistent time on stream and you get such a better flow to things. I was reading the river better, casting better (well, slightly..) and even catching better. 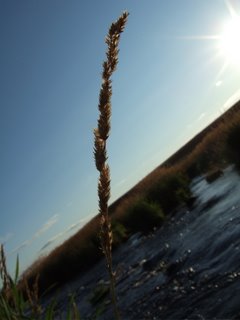 I might post about the wee venture I had with a pal down a local urban river a bit later. But this post is about my finest fishing trip this year. I was on my favourite bit of water. I remebered the BWO saga from the week before, so I arrived in time for late afternoon. I noticed straight away that the swallows (I think..) weren’t as up for it as they were before, but nevertheless one or two were flitting around. I saw a fish splash in a run just up from where I was tackling up. Amazingly, covering the rough area I got a rise almost straight away. This was promising, and a result of using a really long leader I think. Lost the fish of course, but that doesn’t really matter. 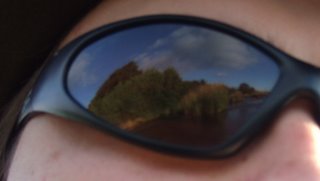 I continued up, fishing some nice riffles and runs with a dry dun pattern, hoping to rise a fish looking up for BWOs blown into the river by the steady breeze. Soon I came across a couple of fish, and ballsed up the strikes nicely. At least I was getting the right presentation though, something I’ve been struggling with too much lately.

I waded on a bit and stood still a little way upstream from where the fish had been, and watched for 10 minutes. A couple more fish showed themselves. I cast to one just a few yards ahead and to my left, and as the fly was about to reach my feet and nice half pounder slashed the fly. Amazing to catch a fish like this, well under a rod length away. Perhaps my camo clothing has finally paid off (eh pal.. 😉 ), but more likely it was just standing very calmly for a good while, along with the slightly crinkled surface. 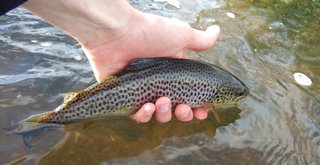 What a pretty trout he was, brought a great big smile to my face 🙂

I fished on quite hard for an hour or so, missing a few rises. Things were definitely not the same as the previous week (not that they would ever be of course), but I was hopeful that the cooler water temperature might provide the match for a spinner fire. 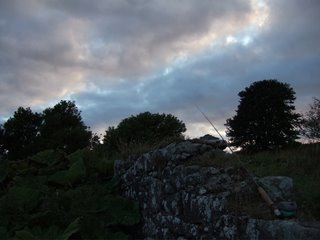 I got out of the river for a wee while and watched. A good mix of flies hovered around. Turns out my suspisions were correct and most of these were pale wateries (so says John Goddard). Also some BWOs and the odd sedge, and I think some caenis as well. What more could a trout ask for? 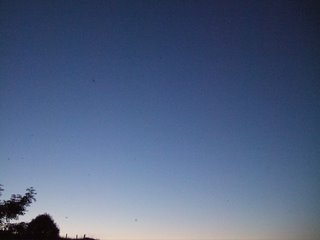 Hard to see, but there are loads of nice bugs in this photo.

After growing frustrated with my attempts to catch one of the pale watery spinners without crushing it, I got back to the river, and started watching carefully. It wasn’t long before the first tiny little suppings gave away that a spinner fall was beginning. Now I remember one of my best evenings last season happened under similar circumstances, so I was getting pretty excited at this point. Off with the sedge and on with a size 18 polyprop sherry spinner. Of course casting this fly at this time of night you have to accept there’s no hope of seeing it on the water. Never mind though, practice at blind upstream nymphing has rewards for the dry fly fisher as well 🙂 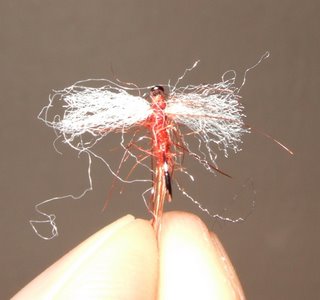 It took a couple of cockups before I got the timing right, but what followed was a simply sublime hour of casting to thousands of rising fish. I caught so many I lost count (rare for me..), which was particularly satisfying because of the educated guesswork involved in the whole thing. A simply wonderful evening, the kind only encountered a couple of times a season. You just had to watch the general area where you knew the fly was, and when a little sip happened, wait a good second or more before tightening. It was interesting to see the tiniest of these little rises was from the best fish of the night, at just over a pound. 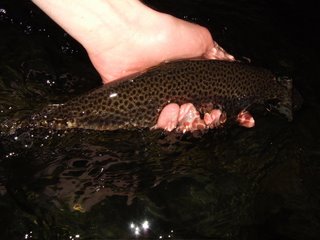 Once again I learned a good few things. The absolutely critical importance of a drag free drift when fishing spinners. How you can get to within a rod length of a fish, provided you’re wading deepish (or hiding), and it’s dark and the fish are feeding hard. This was how I caught a particularly tricky fish where I was getting uncontrollable drag with a normal cast. I waded slowly up, and pretty much dapped the fly onto his nose.

After a while I just stopped casting, and stood in the river and felt.. well if you’ve fished for long enough you’ll know what I mean. The moon rose between some trees and glowed red. 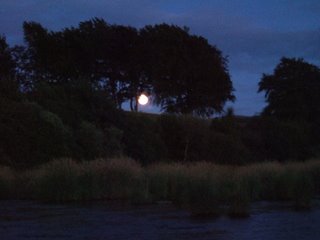 Sometimes you realise that as fly anglers it can be possible to have an experience that goes beyond the usual. Not every time, but just occasionally things click and you’re breathing a different kind of air. Fishing a mid-summer spinner fall is surely one of the best things in fly fishing, the sight of sipping fish with a backdrop of a red-violet sky. The difficult and frustrating fishing times are what help to make an evening like this about as near to perfection as I know.