You are currently browsing the monthly archive for January 2007.

This week it has mostly been…raining. It’s also been rediculously windy. Right now I can hear the wind howling outside, the clouds wizzing by on the great motorway in the sky. I’m hoping the rain stops now for a week or two, long enough for the rivers to drop. I’ve been balsing on about fishing for grayling since October but the oppertunities to do so have been shockingly limited.

My flies are ready though. I’ve got enough bomb flies to destroy West Linton. Some of them even have huge tungsten beads in them. It’s going to be savage. 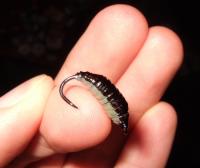 The Czech style nymphs are beginning to look pretty good, if I dare say so. Here’s a simple olive version, together with the sedge pupa it’s supposed to resemble. Not too bad. I think I’m ready to say that if grayling are not caught, it’s because I’m shite, rather than the flies.

Simple But Good – the Saga of the Sage

Back in October I made one of those purchases. You may know the kind. Your mouse hovers over the ‘Confirm Bid’ button for a small eternity before magically clicking, with apparently no proper authorisation from your brain. There follows a few moments of suspended animation whilst the required payment is authorised, and moments later you are brought back to something like proper consciousness. Bugger. How the hell did that happen?

When my eyes de-glazed last October I found myself the owner of a Sage XP fly rod, a 9′ for a weight 5. There are worse things to be lumped with, granted. The odd thing in my case was that I’d never cast a Sage XP, or owned a rod as fast. But something told me this was the rod. I’d been working on my casting quite a lot, and having cast a few other rods I was pretty sure I needed to go faster. There was bugger all wrong with my old rods, in fact one of them was a lovely rod to fish with, but something just wasn’t quite right. Possibly this was my head.
END_OF_DOCUMENT_TOKEN_TO_BE_REPLACED