A recent post by The Windknotter got me thinking about what it means to be a fisherman. He described some of the warning signs that mark the journey from fishing as a past time, to fishing as an obsession. For me, the biggest sign is probably the daily musings. I think I can be pretty confident in saying there isn’t a day that goes by when I’m not thinking about fishing. Sometimes it’s a kind of cast I’ve been working on. Other times it’s a nice fly I’ve noticed in a book or on a website. Often I think about the memorable days I’ve had on the river or loch. Almost all of these are inextricably tied to the people who have shared the experiences with me.

I think that fishing fills a role in my life a little bit like religion. I realise this might sound a little bizarre. Obsessive, indulgent even. That’s fine, I’d pretty much agree. But that’s perhaps one of fishing’s greatest attributes. All things to all men. There’s absolutely nothing wrong with the casual angler’s attitude. Fishing is just something to do, a way to pass the time every few months. But for some folks it becomes a bit more. Fly fishing seems to act like a filter on life. A lot of your thoughts and opinions seem to be affected by it. This doesn’t mean imagining politicians heads as trout heads. It’s much more subtle than that. The very act of wading a river clears the head, and when you go back to fill it up with the rubbish of the world this new invading information overload has to sit alongside an increasingly fishy brain. I’m not even sure what that means, but it sounds about right.When I’m fly fishing I feel like it’s what I was put here to do. This isn’t always good, like a dunking in an icy river in February: it might not be fun, but it certainly wakes you up. Some of my recent blanks haven’t always been particularly inspiring, it must be said. But, there are of course the good times. The feeling of excitement when you find a rising trout is perhaps the central creed of the religion. Casting the fly, seeing the rise and tightening into the fish is the most vital ritual of all. It’s like the Lord’s prayer, something that sums up everything that’s important and wonderful about your belief. It’s a very personal thing, but as in the collective atmosphere of a church, having a pal there makes everything more poignant. 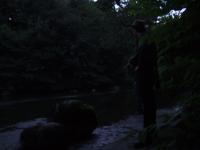 Deep bugging for grayling in winter is probably the closest thing to purgatory in the religion. Cold, dark days spent slowly disolving the extremities into icy balls of pain. An occasional glimpse of a fish may be a reminder of what it’s all about, but at times the whole escapade feels like a masochistic love fest. The redeming features of it are that there’s nothing like a dose of the stuff to make you long for and appreciate the heavenly dry fly decadence of spring and summer. It’s also still fishing (near enough) and there’s not that much of the stuff in December.When I’m not on the river, fishing still seems to be a constant presence in my life. It’s something that, quite often, helps me through the day. I don’t pray to fishing, but perhaps the little pause at 10am to read an article on tying micro-nymphs isn’t so far away. It relaxes, soothes the mind. It gives you something to think about, perhaps an idea for a new fly. I find it gives me space in my mind, so that at 10:15 I’m ready to tackle the paper that’s been sitting on the desk for four months. [Caveat: bullshit alarm..!] 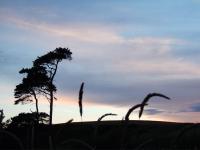 A conversation with my pal Al a couple of months back helped make some of these sentiments real in my head. Neither of us could remember when we were last bored. I don’t mean bored as in, there’s a meeting in five minutes and all I’ve got to do is take a crap and make a brew. I mean the kind of boredom you see in lots of people. The boredom that says the person is a passenger in life. They go to work, drive a car, buy bread. Perhaps there’s a big drinking session to look forward to at the end of the week. For my money, some folks miss out on a real passion. Something to get you through the week, something to look forward to every single day. I think fly fishing is a bit like this for me, and I feel lucky to have found it.