The Stand of Majesty

A few weeks ago the Lanyard of Power caused quite a stir here in fishy blogdom. Some folks unkindly questioned my sanity. Others, those in the know, saw the power and marveled. The Lanyard will prove to be the ultimate accessory for light weight fly fishing. I also have a sneaking suspicion that it will work rather nicely in conjunction with a small rucksac for the hill lochs.

The Lanyard did many things for me. Perhaps the most important was the sense of satisfaction that with just a wee bit of effort I had made something on my own. Twenty five smackers were saved, but the smile I experienced as things came together was the real reward. So, I’ve been inspired. Call it DIY fly fishing, call it madness, but I think I’ve found a little bit of the craftsman in my pathetic, modern skill-less life. This is going to be good.

I have something of a split personality. At times I’m incredibly scatter brained, listlessly ambling through the day with little regard for organisation or precision. Every once in a while it all changes and I become psychotically obsessive. Having recently moved flat (again) I’m currently in an obsessive phase. An ongoing source of annoyance to this obsessive side of my brain has been the organisation (or disorganisation) of fly tying kit. Somehow I’ve amassed an incredible amount of the stuff and I’m perennially trying to organise it all. For the last few months now most of it has been living in a number of plastic boxes. The only problem here is that when I eventually try to get some fly tying done the whole place becomes a bomb site, and I immediately revert back to the scatter-brained personality. This state remains for several weeks until I finally get pissed off and tidy everything up again. Lather, rinse and repeat. 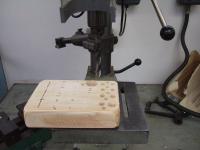 Last week I went along to the Milngavie fly tying club with the old Glasgow fishing buddies. A really excellent angler called Neil Sinclair was demonstrating. Turns out he’s also a terrifically nice chap, which is always a bit grand. Emanuelle, a pal rumoured to be among the finest of Italy’s fly fisherman and a known catcher of big fish, leant forward at the start and whispered in my ear: ” you know, they call him the ‘trout machine’ “. Enough said, the man obviously had class. It turned out he also has brains.

Neil had tackled the problem of tying tool organisation with the help of TK Maxx’s finest cutlery stand. This was a device consisting of wood and holes. Tools go in holes, tools make easy find, angler find self happy man. A little spark flashed in my brain. This could go further. With a little sprinkling of the Magic Powder of Flyfishing and some of the most supreme DIY skills known to man I felt I could be on to something.

One of the most important perks of working at a large university is the access to a workshop. Normally this is used for endlessly pursuing the frontiers of science and progress, but occasionally a more important project passes through the doors. I hunted around for scrap wood. A piece about three inches thick caught my eye. It was rough around the edges, and had some nails in it. Perfecto. 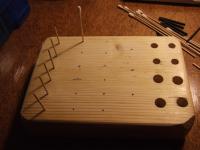 A quick word with a technician and it was cut to the right size. Next, some quality time with a belt sander. The roughness melted away and a piece of pure beauty began to materialise. The grain of the wood, notches, scarring and all looked at me and spoke of simpler times. Times when all a man needed for a bit of satisfaction was a nice chunk of tree. I began to feel excited.

The drill was next. A variety of holes were carefully made. The small ones were positioned on the left side and sized to perfectly fit advanced bobbin holding devices. These were small bits of wood ingeniously sourced from cotton wool bud handles. Larger holes for the tools were positioned on the right side, including one especially large one for the head cement and one for the deer hair stacker. Scissors, dubbing brush (also home made) and bobbin holder were coming home. I felt their excitement and it doubled mine to a dangerously high level.

The Piece of Pure Beauty was coming close to completion. All she needed was some sanding sealer and a quick sand down with fine glass paper and she’d present a silky smooth finish to the world. Oh, a name was needed as well. The Stand of Majesty seemed appropriate, I’m sure you’d agree. 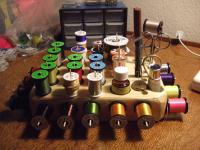 I rushed home tonight to put everything together. Sure enough the Advanced Bobbin Holding Devices fitted snugly into their holes. Placing the first spool of thread onto the bottom left Holding Device was a watershed moment. This was going to be more than good. Epic, magnificent, Majestic. You simply can’t buy this kind of thrill. The tools made their way back home, fitting perfectly. The head cement, the hair stacker, the scissors and even the dark brown marker. It all fitted snugly. By this stage a grin of similarly epic proportions had made its way onto my face.

I haven’t felt this satisfied for a long time. It’s something to do with the wood, the hand worked tools and the bodged on-the-fly design process. The cost, eh, that would be zero pounds and zero pence, is also rather nice. Most of all though I think it’s the time. Not a lot, but enough to think about things. Slowing down, using your hands and turning a piece of tree into something useful for fishing. Heaven knows what it’s like to build your own bamboo fishing rod. Must be pretty damn orgasmic. I’m a long way off that, but this wee project has helped me taste a little of the pride and satisfaction that life long wood workers must know. 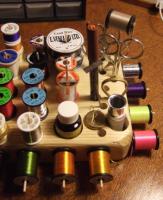 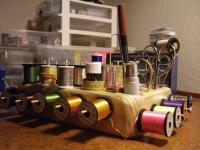 So I’ve now got the most organised fly tying bench in Scotland. She looks like a cross between a space ship and a fishing tackle shop. Thread, tinsel and ribbing are all at a finger’s distance from the vice. I hope she will help me to stay more sane in the long term, and perhaps become a more efficient fly tier. Whatever happens, it’s been already been worth it.