The Quest, Part I: Obsession and It’s Consequences

I have a strange relationship with fly tying. On the one hand it has helped me to get more out of my fishing. I love seeing a trout sup down a little sherry spinner tied by my own two hands. It’s a special kind of satisfaction that just doesn’t exist with shop bought fluff. I have also found, however, that it sometimes has a tendency to drive me into a kind of unhealthy obsession. The most bizarre thing of all is that the obsession isn’t actually about tying flies. 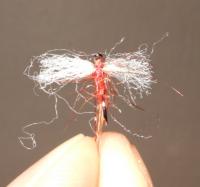 Organisation. Where would we be without the simple joy found in sorting stuff out, finding a proper place for every last widget? Fly tying is an absolute class A activity for those of us with a ‘sorting out’ fetish. The endless packets of dubbing, the myriad feathers and capes, the insane variety of hooks. Oh what joy! I am certain that I have a problem. I’m becoming the kind of fly tier that spends more time, a lot more time, sorting out fly tying paraphernalia than actually tying flies. Perhaps the worst thing of all though, the real bottom clencher, is that I rather suspect that I spend even more time just thinking about sorting out fly tying gear than even sorting the damn stuff out. 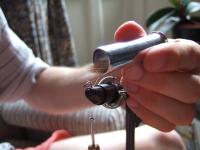 I’m pretty sure that the underlying cause for this worrying obsession is my erratic fly tying behaviour. Let me explain by way of an example. Last season I had a wonderful fishing trip up to the north of Scotland. My brother and I caught countless beautiful trout, many of them on dry flies, and many of them during gloriously calm late summer evenings. By way of chance I discovered one or two really useful flies for such occasions, and I promised myself that a fine selection would be promptly constructed in plenty time for this years trip. Imagine, a whole winter closed season of drizzly saturday mornings, cold feet, central heating and beer (and curry too). 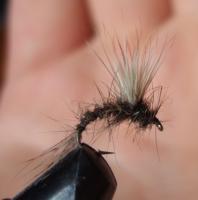 Opening day came around this past March and I found my fly boxes full of lovely Polish woven nymphs, bombs, more nymphs, and even the odd nymph. This fine assortment had of course been enthusiastically tied up for chucking in the vague direction of non-existant winter grayling. The time and effort I spent on those flies was admirable. At least, admirable in the same way that trying to fix a broken washing machine by bashing ones head against it is admirable. The reality is that those grayling flies were tied up during one of the brief obsessively productive phases where real fly tying took place, rather than the standard ‘organisational’ phase. 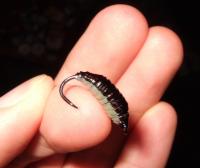 Fresh out of this period of production overload I struggled to find time/motivation enough to replenish my spring dries, and so ended up taxing flies off my brother. In typically waltzing fashion the rest of the season flew by, and when late August reared its head I found myself in dire shortage of even the most essential loch flies. I had no choice but to bundle all my fly tying gear into a shoulder bag and humph it into the boot of the car along with my waders and curry powder. North, north, north we drove. “Buggirt, ya damn moron” I cursed myself. Precious fishing time had to be sacrificed for fly tying, mid-trip. 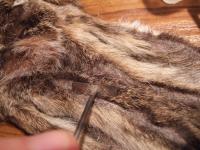 The worst thing about tying flies like this is that some kind of essential material or hardware always goes walkabout. Deer hair, dubbing, hooks. Check. Thread, bobbin holder, scissors. Check. Vice… bugger. It’s some kind of unwritten and unchangeable fact of fly tying life folks, and nothing is ever going to change it. Well, nearly nothing…