Long hours of quiet meditation. Days of ingesting inordinate quantities of super-curry. With-holding toilet use for three days. There are many things we can do to try to change ourselves. I tried to change, I tried to be a Tuesday-night-tier. I tried to set targets and to stick to them. Ten muddler heads a week, how hard can it really be? Sadly, it just doesn’t work. 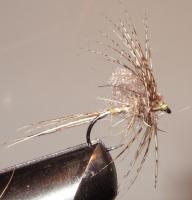 I’ve since come to accept that my erratic fly tying behaviour is probably a reflection of something rather unchangeable and hard-wired into my brain. I’ve heard it referred to as ‘personality’, and it ain’t half an arse at times. My newfound zen-like self acceptance means that some kind of permanent solution has had to be found for the issue of fly tying gear transportation. The Stand of Majesty just wasn’t going to cut it on the road, not with all those bobbin antennae. What was needed was a way to transport everything I could possibly need for any possible situation. Fluff, feathers, bobbins, the whole shebang. The system needed to be hardwearing, reliable, small and most importantly, easily transportable. Ladies and gentlemen, allow me to present to you… the Far-reaching And Ridiculously Tenacious fly tying System (FARTS to you and I). 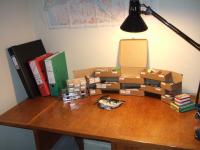 This system is the product of literally months of obsessing. Multiple trips to Ikea, Homebase and B&Q. Endless forays through the long, cold isles of fishing tackle shops. Covert missions into the very heart of the haberdashery industry. The list goes on, folks. Let me take you on an exclusive tour of FARTS.

The Cube of Domination

First we have the soul of the system: the Cube of Domination. I came across this little gem last month whilst trawling through the bowels of Edinburgh’s Ikea. To the untrained eye it appears to be a dodgy cardboard box with a handle on top. Turn the Knobs of Golden Revelation, however, and a world of fly tying glory is gradually revealed: the Cube of Domination is magically transformed into 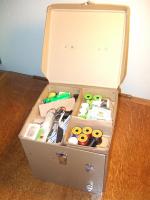 the Bastion of Undying Majesty. Spread before our disbelieving eyes is an intricate system of interconnecting boxes, each carefully labeled and each containing a fine assortment of fly tying goodies. This is a veritable mansion for the important tools and smaller materials needed for fly construction. Thread bobbins, deer hair, poly yarn, CDC. Pretty much every thing smaller than bird wings has its place. The best bit of all, of course, is that in less than 10 seconds the whole unit can be folded back together, and the glory of the Bastion is once again replaced by the subtle tones and intriguing portability of the Cube.

The Folders of Beauty 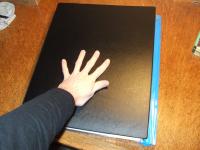 The second key element of FARTS are the Folders of Beauty. These are a fine bit of fly tying organisation, inspired by a wee article I read in last months Fly Fishing and Fly Tying magazine. The basic idea is that all capes, bird wings and long feathers are stored in zip-up bags. These can be arranged and inserted into a large A3 size ring binder. A neat little trick is to run thick duct-tape up the spine of the bags, and then punch holes in the tape. This preserves the bags which helps to keep the fluffy contents safe from naughty beasts.

With this basic idea in mind, there’s nothing to stop all manner of fly tying paraphernalia from being stored this way. In fact, that’s exactly what I’ve done. The Folders of Beauty have now spawned a sibling, and they’re

called the Folders of Wee Beauty. They are quick, pretty cheap, and immediately portable. Together with careful labeling of the bags, it would take a foolish fellow to loose any more partridge feathers.

The third and last component of FARTS are the Boxes of Sublime Reason. Here is where hooks and dubbing materials live. These humble bedfellows have been painstakingly arranged into individual compartments of a number of John Lewis’ finest haberdashery boxes. The joy of labeling all the compartments was truly something to behold. Most of the compartments were split into two separate sections with the help of super-glue and bits of foam. The objective, as per the mission statement, was to reduce the footprint of every component of FARTS to enhance sanity and portability. So, there are three dubbing boxes and a single hook box. The dubbings have been arranged carefully, of course, so that depending on the time of the year only one or two need to be brought along. There’s a box for all hare’s fur and seal’s fur, a box for gaudy grayling mixes, and a wee box of miscellaneous colours. Top banana. 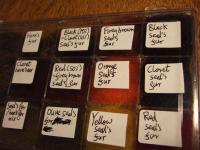 The whole setup can now be tidied away into the corner of my desk. Despite what you and I know, it hardly even looks like the insane creation of an obsessive, yet failed, fly tier. And of course, it’s always ready to be chucked in a bag and humphed into the boot of my car. I’ve been practicing tying flies when my vice is attached to my steering wheel, and with a wee bit of practice it’s surprisingly easy to whip things up. It should be emphasised at his juncture that such practices should not be undertaken whilst the car possesses non-zero kinetic energy. 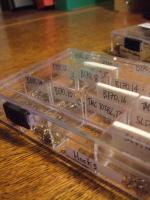 My quest has taught me a lot. I have an encyclopedic knowledge of the inner workings of Ikea’s desk storage department. I know more than I ever thought possible about the haberdashery industry, and let me assure you, some of the things I know would frighten the socks off yeez. I’d like to say I learned a lot about myself, but in reality I’ve probably just learnt that my obsessive streak can lead to interesting things. An A4 filofax full of dead rabbit, for example.

Best of all, I’ve got a really neat fly tying system that is surely, and I really mean it this time, organised enough for me to actually produce some flies this winter. There are simply no more excuses. Apart from that beautiful 3 weight I saw last week…