Of vests and man-bags

One of the first things I bought when I started fly fishing was a fishing vest. After several hours of careful deliberation over three separate visits to a local tackle shop I settled on a Ron Thomson jobbie at fifteen quid. That last line reveals more about my personality than I’m sometimes willing to admit. It also gives me a wry smile now, a few years down the line. I remember thinking something like “hmm… all the fly fishing heros I’ve seen seem to wear one of these vests, so I’d better get one. With lots of pockets. And a D-ring on the back for my net. Oooh yeah, I’ll need a net too, for all the nettable fish I’m going to be catching down the local trout sewer…Ho hum..” 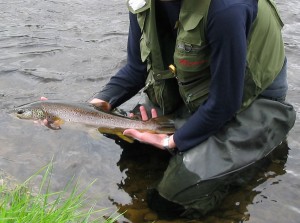 My Ron Tommie was a lovely dull green colour, and seemed to be made from the kind of cotton left over after some factory in deepest China had finished making Y-fronts for Asda. Flimsy would be polite. The zips looked to be the same as those you find on really cheap purses for sale at Saturday markets all over the country. Great as a last minute mother’s day present, not so great for the brutal treatment of a manic young fisherthing, crawling through thick urban undergrowth to get to hidden bits of river. The first one went after a few weeks, but despite my unkind comments most of the others actually held out for a couple of years.

Upon arriving home with my Tommie-vest I proceeded to enthusiastically fill up as many of the pockets as possible. Plans were made for all eventualities, including famine, nuclear holocaust, rampaging mongeese and long fly-sucking tree branches. The only problem was that once I’d distributed all my flyboxes, floatant, tippet, permits and suchlike, there were still a couple of pockets which didn’t threaten to split open at any moment. Obviously I wasn’t carrying enough flies, so a further trip to the tackle shop was required. A couple of new fly boxes and a few dozen loch-style flies later and things were looking and feeling decidedly heavy (except for my wallet..). Heaviness of tackle is next to manliness of course, so I was all set. 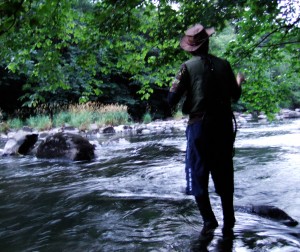 A feature of the Ron-Tom I was particularly proud of was the patch of fluff stuck to one of the pocket flaps close to the left breast. Over the following two or three years this became the very hub of my fishing world, as more and more of my flies seemed to migrate from the neatly arranged boxes and into the party on the patch. Rather than carefully scan rows of carefully organised flies in plush fly boxes, I began to develop a slightly crooked neck from sticking my chin into my chest to examine proceedings on the patch. I really do have good intentions when it comes to fishing organisation, but things just seem to get out of hand.

The vest had a proud life, witnessing all of my fishing exploits up to the end of the 2006 season. She saw me catch a huge river trout, a huge river grayling, fall in (multiple times), blank (multiple times), fall in (some more) and hugged my shivering torso as I watched lovely summer sunsets (after falling in). I’ve thought about it a lot, and I can’t think of anything that would have been gained by spending an extra 50 or 100 quid on a flash-vest. Ok, perhaps a Simms, Orvis or suchlike would have lasted a decade instead of half that, but seriously, fly fishing doesn’t have to be expensive and blingy (some people may disagree).

The green wonder now lies at the bottom of my wardrobe, carefully folded and sucking up the lovely flavour of the surrounding pinewood. One day I will dig her back out again and go fishing. I’m hoping the relationship will still be workable, for I’ve since been unfaithful and moved on to modern rubbish. Perhaps the glory of the woody smell will have done the trick, like a nice bottle of perfume. 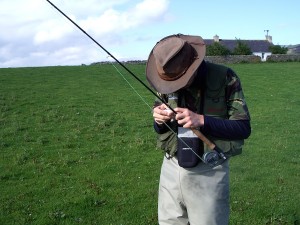 Indeed, a day came when it was time to move on. My gear carrying device has since been altered to a chest pack. Note I say altered, and not upgraded. I do now find a chest pack to be a superior all-round system, but I refuse to say that anything is an upgrade of my humble vest. Indeed, while the old vest did lend me a certain ‘elderly’ quality, I occasionally have to refer to the chest pack as a ‘man-bag’, in order to reassure myself of its suitability for a testosterone-packed individual such as me. This has not been helped by occasional unthoughtful comments from people who shall remain nameless.

I suppose any piece of fishing gear can become precious. Fishing for hours on end wearing the vest it becomes part of your fishing mindset, something that is just there. It was a strangely uncomfortable experience making the switch to a new pack, and I didn’t feel comfortable at all for a month or so. Of course all of this talk is pretty much total unadulterated bullshit, because in the end you go fishing for reasons other than pathetic sentimental memories of a fifteen quid piece of Y-front, but that’s what blogging is here for. The only exception to this cutting sentiment is the Hat, but that’s a whole other post.

Believe it or not this post started out as a review of the aforementioned chest pack. That post is now in the pipelines, so watch out over the next few days. It’s one of the older William Joseph chest packs, and it’s a beauty. The review will be in the reviews section soon(ish)…