Time on the river has been extremely limited this season. I’m currently going through the process of writing up a big project for my job (ok, it’s a thesis..) which appears to be more and more like torture every day. The few times I have been out seem to have taken on a new significance, like rare glimpses of sunlight at the end of a big dark cave. 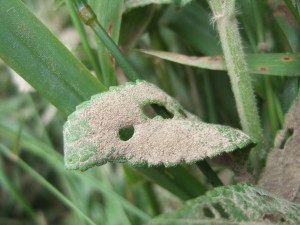 Last weekend I headed over to a favourite river for some serious lone time. Lone time, with added trout. As part of my ongoing musings into the optimum rod to use on rivers, I strung up the shotgun for a bit of a fling. Old stiffy, as she is now also know, turned out to be a whole lot better than I imagined. (For new readers, Old stiffy is a Sage XP, 9′, 5 weight.) 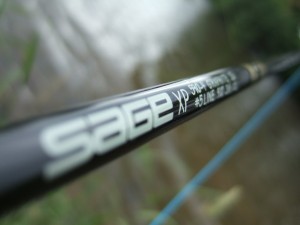 Streamers and dries lie at the opposite ends of the fly fishing spectrum. I already love dries, and fish them wherever possible. But I’ve recently felt an unnerving attraction towards streamers, with their unashamed brashness and ‘use me or screw me’ attitude. This may or may not have something to do with the incredible number of large trout that a certain fishing acquaintance of mine has caught whilst using them over the past couple of seasons. The problem, or perhaps `challenge’ is a better word, lies in combining the two approaches in an outfit that allows both vices to be enjoyed equally. 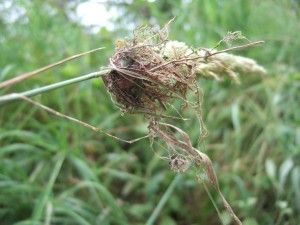 For the first couple of hours I used an intermediate line with a fast sinking polyleader looped onto the end. Together with a weighted streamer this combination can get reasonably deep quite quickly, so is perfect for searching out deeper runs and seams. This last sentence is yet another wonderful example of the bullshit I spout on occasion (`only on occasion‘ the audience screams!), for I am a total newbie to streamer fishing, and have only ever caught a handful of fish like this. What I should have said was that it feels like a perfect setup for searching out the blah blah blah..

Well I searched and I searched for quite a few hours, and didn’t see, hear, feel or smell any trout. Disgruntled that all my good feelings about streamer fishing weren’t producing, I sat down and mused. There was plenty of evidence of the recent floods our rivers have experienced. The high water line looked like a frightening prospect in comparison to the clear water flowing past my feet. It was funny to see the silt deposited on leaves that normally only shower in the rain. The clear water drew my attention again, and I longed for dry fly simplicity. 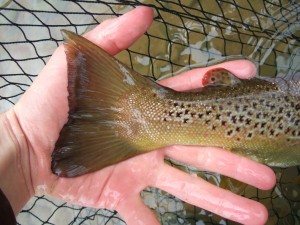 Off with the intermediate-sink-tip-polyleader-good-feeling nonsense, and on with a floating fiver. This one hadn’t been used in more than a season, and still had the glued-in leader butt I once eulogised over to anyone who would listen. It really is a nice setup, so smooth and with excellent turnover. As usual I overestimated the required leader length, ending up with something that could be used to measure swimming pools. Something like 20′, which is really a little obscene. 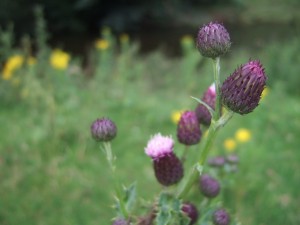 With my lewd leader I thus marched off up to the next run. During the lengthy process of switching over my setup I had noticed a single, solitary rise in a small bit of creased water where a tiny burn flowed into the main river. With no more sign of life forthcoming I began short casts from the back of the run, slowly working up towards the burn. Third or fourth cast in and there was a wonderful, savage take to my fly. It was the kind of take that reminded me of the cutthroat trout in the west of Canada a few seasons back. Eager and willing. The fish now connected to Old stiffy quickly demonstrated that stiffness is a relative term, which is both reassuring and disturbing at the same time. It was the first fish I’ve hooked on the rod that actually made me feel like there was going to be a fight involved. There was. 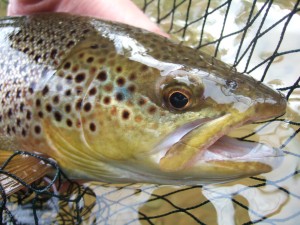 The trout jumped out the water maniacally, showing the same eagerness to reach for the sky as she’d shown for my floating fly. I had that glorious, stomach churning feeling as I realised that this was probably my fish of the season, and I’d better not cock up. She quickly decided that the fast riffley run downstream looked like a good spot for a picnic, and bolted off. I had foolishly thought that a bit of sneakiness with side pressure and a ready net might forego any complications, and was left with one hand on the rod, one clutching my net and the other… flailing for the fly line. That’s three hands, which is what it felt like. 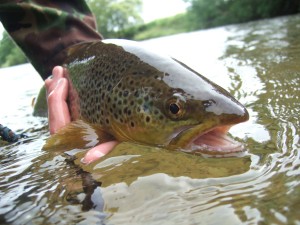 I performed that kind of half-shuffle, half-long jump motion required to pursue a fish downstream through thigh-high water, whilst waving my rod about quite a lot and repeatedly muttering “don’t come off, please don’t come off…”. In the quieter water beyond the riffle I started to apply some strong pressure, which caused the fish to jump again. There seems to be no better time for a fish to throw a hook than during a jump, so I eased off a little. By now I’d seen the trout quite clearly through the water (did I mention it was clear?) and she was a beauty. A more controlled application of side pressure brought her to the surface, and with a couple of desperate reaches with the net she was in. 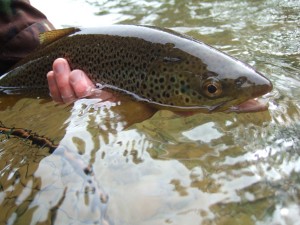 As it happened I had chosen this day to take along my new net, one of those nice Maclean weigh-nets from New Zealand. The idea of a weigh-net is actually quite funny for most of the fishing I do, what with micro-parr and the odd half-pounder signifying a good day at the moment. But I had got a good deal on it, so plumped up the cash in an act not far from self-mockery. The beauty with a weigh net, over the more conventional Salter scales that you manually hook onto the net at the opportune moment, is that the reading you get doesn’t have to be adjusted for the weight of the net. It’s already calibrated. So what you see, for one God-foresaken time, is what you get. In this case that was exactly 2.5lb of golden, gorgeous trout.

A few moments for a photo session and I eased her (I’m pretty sure it was a female; she was certainly very pretty and slightly feminine in a Lara Croft kind of way) into the flow. A couple of moments and she pushed forward and quickly disappeared into the background of the rocky riverbed. Unquestionably my fish of the season, and unquestionably the nicest feeling I can remember for quite a long time. 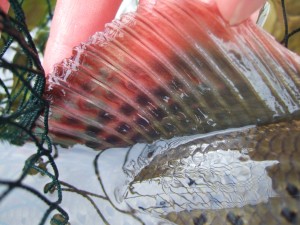 After all that I had to phone someone, so it was my dad and brother who got the first telling. They were sitting down to a lovely curry at the time, which eased the reception of the fact that I was having amazing fishing and they weren’t. There’s an amazing rush of excitement after a trout like that which is hard to explain to folks who don’t fish. It’s a kind of head spinning rush of joy which seems to far outweigh the material fact of the capture. Even if the trout was quite big, even if it was beautiful, why does it feel so incredibly, soul-burstingly satisfying? 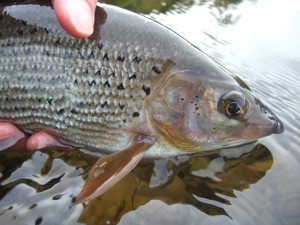 I fished on up the run with nothing to show for it. Nothing except for the whopping great grin on my face from that trout, of course. I slowly started to sink back into something like a regular fishing mode, and began to appreciate the reason that Old stiffy is so highly regarded in the trout world. She really does turn over leaders like the All Blacks against England. Loops unroll quickly, smoothly and with pin-prick accuracy. Even a fairly moderate breeze doesn’t seem to be a great problem. There’s still no question that when fishing dries I feel more at home with my slightly noodly 3 weight, but in all honesty it wasn’t too bad. And it certainly makes fishing the streamers a little less comical. Perhaps I just need to accept that fishing dries and streamers requires quite a lot of compromise on both parts. I think that a stiffish 5 weight like this is probably as close to the useful middle ground as can be had. 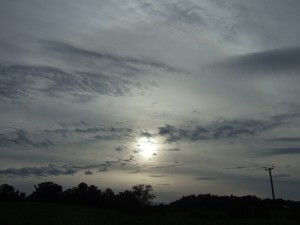 After an hour or so of fishless fishing, I crawled out the river and walked up past some moderately interested cows to a long flat. There were fewer trees, but oddly enough a couple of fish rose almost immediately. There had been no sign of any hatch all day, so I wasn’t sure what had brought them up. The rises were gentle though, so I put up a little CDC thing. Eventually I got a solid take, which turned out to be a very feisty grayling (are grayling ever not feisty?). A clean 1lb and a quarter, according to my what-you-see-is-what-you-get-net. He (I think it was a he, the dorsal was pretty long and he looked pissed off) was slipped back with a bit of a splash on my camera, and I decided it was time to trundle back to the car. I don’t know how many more days I’m doing to get on the river this season, but I hope this one will give me a little smile when the going is rough. It will certainly be a long time before I forget the enthusiasm of that take from the beautiful brownie; a bit of cutthroat hope in a big dark cave.