A while back I was sitting in a pub having a conversation with some friends. The topic was our favourite sounds. A bunch of the usual suspects came up, fresh snow under foot, a gurgling highland burn, the sea washing up and down a sandy beach. There were suggestions from the city too, the distant chatter of a primary school playground, the far-off pulsing of train wheels passing over tracks, the rising roar of a football crowd. I love all of these sounds, and I was delighted to partake of such conversation.

Eventually I got to thinking about my own favourite sound, the one that really sticks out and sends the shivers down my spine. It was all a bit surreal to be honest, as I found myself describing a sound I’d only ever heard a handful of times. I don’t think I’d ever even had a outright conscious thought about it, let along taken the time to put it at the top of my favourite sounds list. It’s a really wonderful sound, but I think what sets it apart is the environment in which it must be heard. 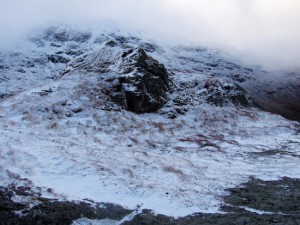 I’ve only ever heard the sound while on my own. My clearest recollection comes from a hillwalk a couple of years back. I was walking up a long glen, along the bottom of which flowed a burn of such crystal clarity that I simply had to scramble down and plunge my hand into one of its bitter-cold pools. I remember fanning out my fingers and pausing for a few moments as the flesh under my fingernails started to turn blue. Perhaps it was the long walk, the heavy pack or just the sheer relief of having time alone in a beautiful glen, but I found staring at my hand through the water utterly compelling. As numbness finally began to turn to pain, I freed my frigid hand from the water and continued up the glen.

As I neared the head of the glen, my objective loomed large ahead and above me. A myriad of small gullies criss-crossed each other on my right hand side, falling steeply down to the valley floor. My route lay to the left, up the grassy ridge studded with boulders and wee knolls. My breathing steadied and my heart slowed, and as their combined hum faded into the background, the sound came seeping into my head.

It was like a chorus of far-away flutes playing in unison and slightly out of tune with each other. At the first instant of perceiving it, I felt a little confused, and I remember turning 360 degrees around, looking for a sign of life. None was to be seen, save the circling raven, at least one of which seems to inhabit every single glen in Scotland. I faced back toward my route, before my attention was pulled back to the right and those snaking gullies.

I was pretty sure that the sound was coming from up the cliff face, caused by a perfect matching of the wind direction to the gully faces. As the wind sheared across the sharp edges of the gullies, it caused them to sound out a chorus of notes that resonated around the amphitheatre. I don’t know why this particular set of gullies produced such a pronounced audible sound, but I do know that it was an absorbing experience and one that I won’t forget. 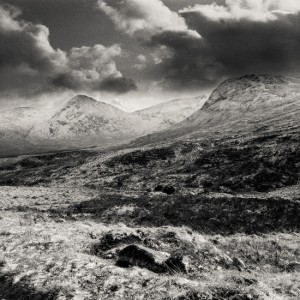 The chorus came and went as the wind sped up and slowed down. Eventually I could predict when the sound would come by the feeling of increasing cold on my right cheek. I squinted my eyes and searched up and down the mountain side, perhaps expecting to see evidence of some lone inhabitant of the glen who was having me on. There were no other human souls in the glen that day, just my confused and amazed self, the wind, the cliffs and the raven.

I think the reason the sound was so completely enthralling was that, standing alone in a glen like that, one’s imagination can quickly find itself free and running. I thought of the folks that used to live in the glen, and all of the other countless glens like it, who have now died or moved on, leaving the beautiful landscape to pretenders like myself. I wondered if they had ever noticed the sound.

But the strongest feeling I had was that the sound was the closest thing to the sound of eternity that I had ever heard or felt. I wasn’t listening to something crafted by man or creature, but to a musical sound caused by wind and rock. I had no control, no role to play, no applause to give. I was there to appreciate it perhaps, but I’m not sure for what else. Whenever I get to thinking about life and its ups and down, perhaps even its purpose on a particularly dour day, I find it difficult to comprehend the scale and meaning of time. Standing there, trying to predict the onset of the flutes, I had a kind of moment of clarity where I thought, for the briefest moment, that I understood what a really long time was like.

I have often looked at rocks and mountains and thought about the brevity of my life, even the brevity of human existence. But even then I find it hard to really connect with or understand those thoughts. Sure, some things are old, I’m pretty young, what can I say? I think the perception of a tangible sensation helped make the connection in a way that, perhaps, nothing else can. I was an intruder in the landscape, there for a brief few hours, and I was lucky enough to hear a sound that has probably sounded in that glen since the last ice age.

In the end of course, I’m tempted to laugh all of this quasi-philosohpical nonsense off, and to say that a sound is just a sound, and the sound in that glen just happened to be a particularly nice one. Some days I do just that, but not this morning. For today as least, it’s the sound that helps me understand.