Whenever I finally get around to tying up some flies, I like to do it mass-production style. In the case of DHEs, this means tying up loads of hooks with wings and trailing thread for ribbing. I find that this way it’s easier to get the wings consistently good, by which I mean positioned correctly, and standing erect. It also lets me apply a little dob of varnish on the thread wraps around the wing. It takes a few minutes for the varnish to harden properly, but makes an already bullet-proof fly into something bordering on nuclear-armageddon-proof. When working on half a dozen or so at a time, by the time the last hook has been winged, the first one is ready for its body and thorax. 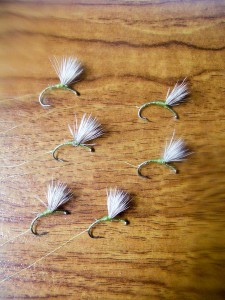 As a tying note with these flies, I find it essential to wack a whole load of thread wraps on the eye side of the wing, as a way to prop it up properly. I like to have the profile of the fly perfected before adding a body or thorax. These days I also tend to make a few turns of thread around the base of the wing, a bit like when posting a wing for a parachute fly. Again, it’s just a wee thing I’ve found to help with consistency in tying, and ultimately in presentation. 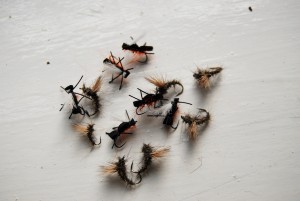 My final step before putting on the body or thorax is to check that the wing is reasonably centred. I find it’s quite common for the wing to be slightly biased towards the blind side (as seen from my tying position), so a wee bit of pruning is sometimes required to even things out. I find this to be important in terms of the final presentation on the water. An uneven wing often results in the fly sitting on its side on the water, rather than with the hook point and body under water.

Other flies I’m tying are terrestrial bugs, made from foam sheets and rubber legs. These are fun to tie, and pretty easy as well. The crucial thing I’ve discovered is to always add a wee bit of poly-yarn as a wing, to help with sighting. Without such a visual target, it’s very difficult to spot the fly on the water, as it sits very low. Indeed, one might say a level of ultra-stealth camo has been achieved, which fools both angler and fish. I tend to use white yarn, but I’ve seen other folks using yellow or pink. The wing is usually cut short and thus hidden when seen from underwater, so I don’t suppose it makes any difference to the fish.