The Loch of Trees

Last weekend I decided it was high time to head for a loch and try some traditional strip-n-hope. All fishing has been on rivers so far this season. Yet as much as I love the rivers there is definitely a time to just take it easy and relax by the side of a beautiful wild loch for a few hours. 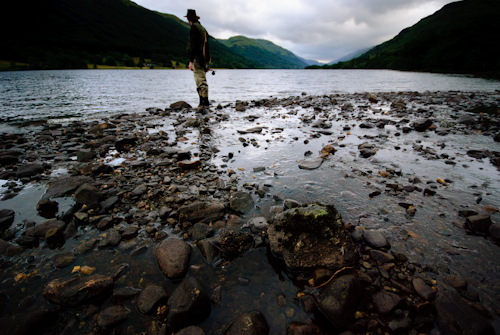 I’ve been looking for a good wild loch to concentrate on which is within an easy(ish) day trip distance of Old Smokey, and after some considerable deliberation I opted for a long strip of water somewhat out of the way and somewhat further than close. We discovered the loch was quiet and relatively un-soiled, and it would certainly be nice for it to stay that way. So The Loch of Trees it is.

Despite arriving at the back of 4pm, we still passed a wonderful few hours by tree-lined shores, in the company of naught but a good handful of trout, a stiffish westerly and about 20 rain showers. The only hitch was my leaky waders. The fresh sealant I’d smeared down the inside leg in the morning was not entirely dry when we arrived so I opted to spend half an hour tying flies with my ultra-minimalist portable fly-tying kit, hoping the scotch-mist and humid atmosphere might help. Eventually I decided to hot-foot it down to the loch anyway, and indeed it turned out that my leaky waders remained that way. 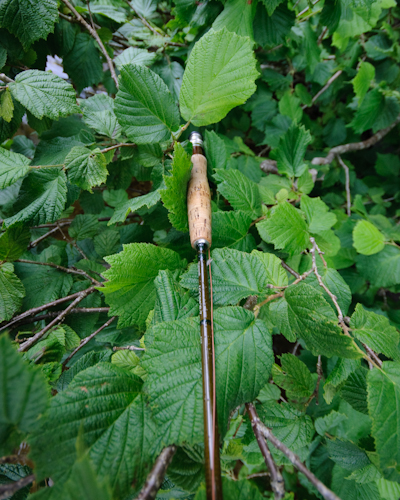 The steel gray clouds which marched overhead, together with the favourable temperature, left me sure that we were in with a good chance of some action. Upon arriving I put up a standard starting cast of size 12 deer hair segde (tied extra bushy..) on the dropper with a black pennel/blae’n’black on the point. I had opted to fish with the 8.5′ 4 weight, which is a lovely light rod to use for several hours of continuous casting, but does leave a little to be desired in the cast-for-glory stakes needed with a 3 fly cast.

Arriving at the water’s edge we were greeted by a lovely ripple, and I quickly headed off upwind with the intention of fishing back down the bay, making casts out across the breeze.

It wasn’t long before the first offer, a quick slash at the DHS as it settled on the water. Missed it of course. A few minutes later another offer, this time to the wet fly on the point. Missed again, but it still seemed like a good omen. I steadily fished the flies down the bay, making slow retrieves and sometimes leaving the flies static to drift in the drift. 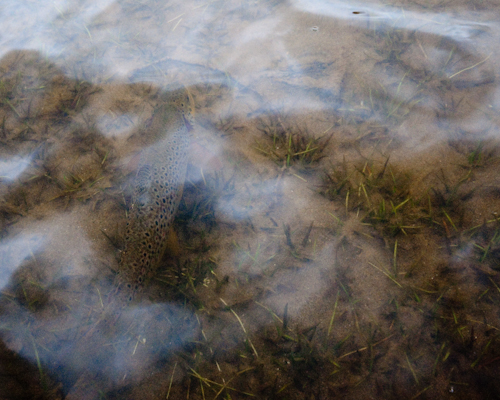 There followed a frustratingly long period with not a sign of anything, except a good soaking from the now continuous drizzle. I eventually decided for a switch in tactics, and opted for a butcher on the point and my favourite black zulu on the dropper.

Not too long in, and now fishing in a more traditional haul’n’hope style, a nice trout impaled itself on the zulu and put up a merry scrap. I tried to get a photo, but alas he did escape. First one always gets his freedom anyway, but a better photo of what was a gloriously marked, yellow-bellied brownie would have been nice.

Within the next short while another couple of fish opted for the zulu, though both were considerably smaller and of totally different marking; much darker and peatier. The first fish had been taken close to the far drop-off of a sandy-bottomed ledge, so I guess that accounted for his lovely condition. 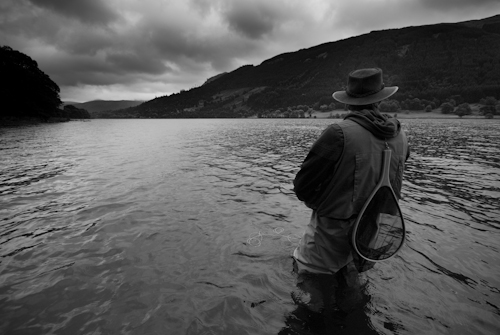 Further down, into the next bay and another nice trout, probably just over the half-pound mark, and this time taken for the following day’s lunch. Interestingly the fish appeared to have been feeding on a mixture of unidentifiable black grubs and bits of loch-weed. I thought trout were carnivores..? The last time I saw weed in a trout’s stomach was from an escapee stocky on Loch Awe. Strange.. or perhaps normal and I don’t know my arse from my elbow.

As the evening wore on and the rain grew more permanent we decided to head for curry. Walking back through the forest we were once again confronted by a beautiful array of trees, quite a number of which I couldn’t identify. Work to do there. I had foolishly forgotten my wondrous wee guidebook, but I took some mental notes. Ash I now believe, interspersed with old oaks and the odd silver birch. What a fantastic place.