A small stream of quiet light

It’s almost a month since I’ve been on a river or loch. And with the hit and (mostly) miss season I’ve been having on most of my usual beats I decided on Sunday that it was time to explore a bit. An important lesson I’ve learned over the past few seasons, however, is that to explore does not necessarily mean to travel far. 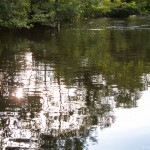 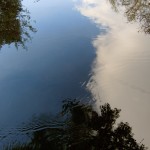 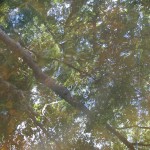 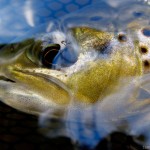 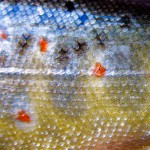 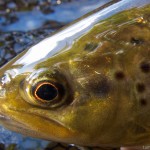 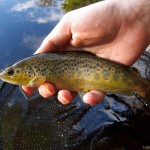 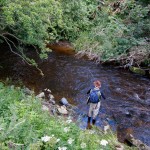 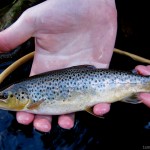 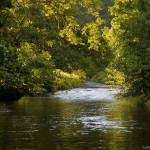 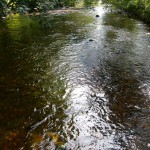 So it was with some excitement that a fishing pal and I stalked through woods and across fallow fields towards a hidden stream which slid quietly through the undergrowth. We arrived to find the water running slightly high and with a beautiful Ardbeg tinge. After the barren month of June all this recent rain suddenly felt rather welcome.

We tackled up under a tunnel of overhanging trees. Upstream the late afternoon light crept through the layers of canopy and twinkled all over the streamy runs and pools. The feeling of anticipation on such days is tangibly electric. I wasn’t expecting anything big, indeed that was not the point at all. It was something else, much less describable, to do with the combination of yellow light, yellow bellies and the perpetual flow of clear water.

I flited about between fishing a small dry terrestrial and putting up a similarly small nymphal offering. Hope prevailed (as it seems to when on a river) and on went the dry. Some poor wading, poor casting and generally shocking rivercraft soon put paid to the first few pools. By the time a large, slow bend pool was reached however, I’d come down a few sizes to a no. 22 nondescript grey spinner and was once again feeling optimistic.

After several further failed attempts I finally managed to concoct the right combination of airy cast, steady feet and luck, and the first yellow-belly came scrapping back towards me. A couple more followed before we moved upstream as the sun dropped lower and coolness started to fold itself around the valley.

I switched to a wee brown-wire nymph, but our dutiful comrade stuck to his guns with a dirty duster and was rewarded with a pool of multiple rising trout. A couple of LDRs followed before finally his first brownie of the season came to hand, followed in quick succession by a brace more.

Twenty minutes later and the fish were still sipping at some indeterminable surface offerings, but a mutual decision was made to draw things to a close and go in search of a mucherious goodfoodus (pizza). This we achieved with not even a hint of a long distance release.