You are currently browsing the archive for the fishing (small streams) category.

Fishing is a great way to see biology in action. Over on my regular beats the average trout probably pushes 8 or 9oz, with a good number of fish towards a pound and even the odd monster. Last week I nipped out of town one evening with the intention of hitting one of those regular spots. I’d left things rather late, however, so I decided to stop by one of the tiny wee burns I always skip past on my usual travels. A quick saunter down behind some bushes revealed a pretty little ribbon of brackish looking water cutting its way through the commercial forestry. Within two minutes a couple of rings emerged on the surface, and I bolted up to the car for the gear. 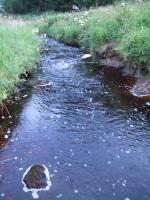 END_OF_DOCUMENT_TOKEN_TO_BE_REPLACED

I headed over to visit family in Glasgow this last weekend. Got there around half eight Friday evening and bolted straight out the door again, brother in tow, to get some fishing done. Still plenty light around at this time of year, though some dark clouds threatened us. 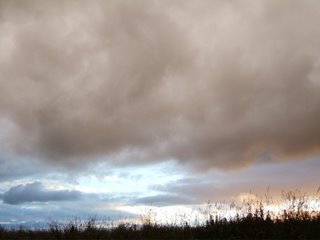 Actually it was the sort of evening I love. Moody with changing light, all very atmospheric. A nice rainbow (the kind we like on this river..!) promised us the fishing would be good. 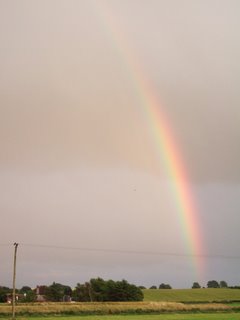 Started down at a stretch I rather like after having something of a red-letter trip there last season. As ever the river provided us with some rising fish. On with the wee deer hair sedges and not long before the brother landed a pretty trutta.

Fish were in a strange mood this evening. Sometimes they splashed aggressively at the odd sedge, sometimes they barely broke the surface sipping something I couldn’t see. Needless to say I opted for the sedgey approach. Again I felt out of practice with wayward casts and general frustration. I also did my best to fall in for about the 5th time this season but somehow avoided doing so.

Fished late on and of course the fish were still moving a bit. At this time of year on this stretch you can get really close to the fish because the banks are high, provided it’s quite dark. Makes for exciting fishing with fish barely a rod tip away. 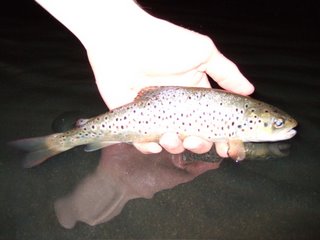 Had a couple fish to hand and a few more lost, so an enjoyable evening all round. Weather wasn’t really kind in fishing terms with the cool breeze. Given a balmy evening this stretch can be amazing with the fish nailing anything that looks like a sedge. I reckon I’ll try the old cork-fly later on this season.

Saterday was rather an off day weather wise, so we headed out on Sunday afternoon. Our fave wee tributary burns were out of action along with the main river so we went towards the source. Things didn’t look too promising when we got there with the river rather slow, brown and generally canal like. Hardly a lovely tumbling stream like some other stretches we know. After a good bit of laughter at our chances of catching we actually found a few fish starting to feed on a sparse hatch of small olives coming off around 4pm. 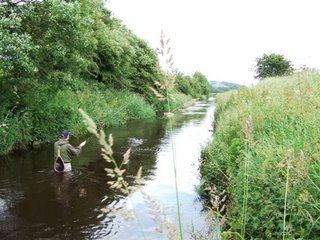 How expert does this fellow look?!

Brother fished a wee dirty duster (of my tying as usual) whilst I opted for a size 18 sedge-related offering. Very interesting actually watching the differences in the takes between these two flies. I’m pretty sure the fish were mostly taking the ascending olive nymphs just before emergence, and the dirty duster got takes almost the same as the normal rises. My sedge however received what I can only describe as ‘trout abuse’. I wonder if there’s such a thing as trout therepy because the aggression they showed was out of order. 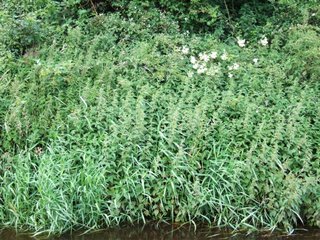 Found this huge patch of nettles next to the river, just asking for an angler to take a stumble into them. This has happened to me a couple times before and caused mild stress…

On the way back I asked the some local cows if there were any hot flies for this stretch but they just grunted and kept on chewing. I’ve yet to meet a really good fly fishing cow, but you’d have thought that even the average ones had a favourite fly. 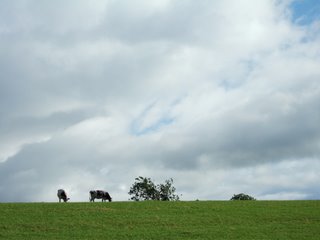